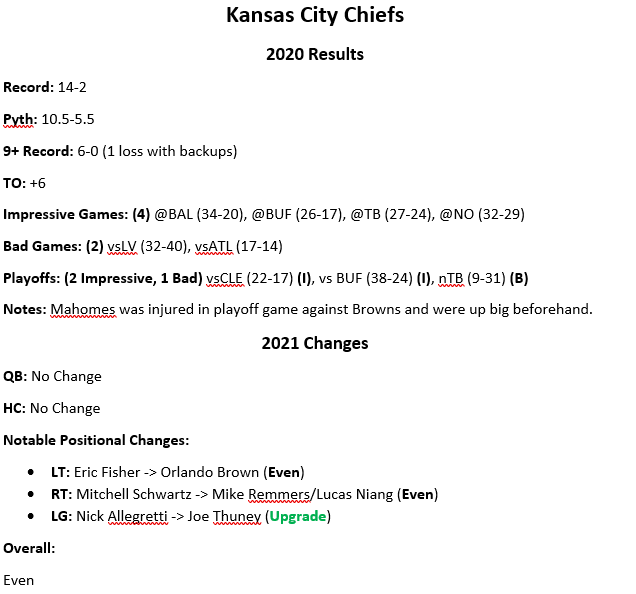 Doing this team overview for the Chiefs was an interesting exercise, as I tried to view the team from an outsider’s perspective. Having now done a couple dozen of these, I have to say that slate of impressive wins is, indeed, impressive. Those were arguably the 4 best teams in the NFL last year besides Kansas City, all on the road, and the Chiefs handled them without much problem.

It also highlights how inherently conservative my “notable changes” are. For all the hype around our offensive line improvements, I really only have one notable upgrade. But to have a quarterback on a veteran contract and still be able to have a notable upgrade without any notable downgrades is remarkable. Even teams with cheap quarterbacks tended to have notable downgrades on the roster.

For the team itself, there’s no real reason to believe they’ll be anything but dominant again. Including the playoffs, Mahomes is 30-5 the last 2 seasons. That’d be an average of 14.5 wins over 17 games. 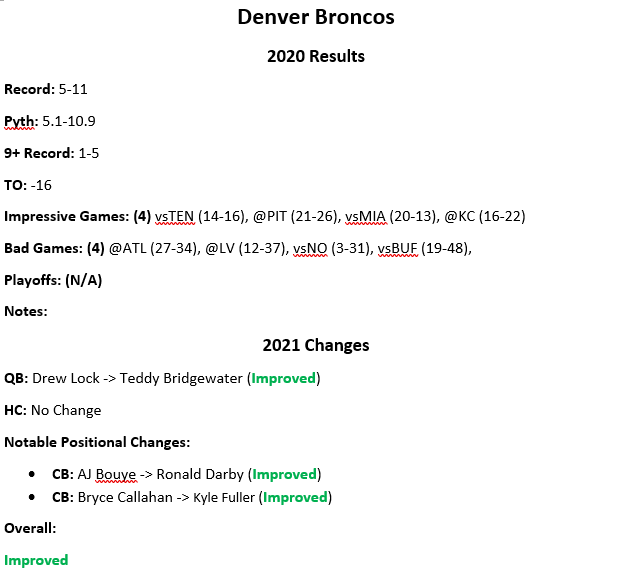 I hate saying this, but the Broncos had a really nice offseason. Maybe even the best in the NFL. With the addition of Darby and Fuller their defense will be legit, and Bridgewater will provide the kind of steady competence at the quarterback position that they’ve been sorely lacking ever since Manning retired. It’s not an exaggeration to say that they’d be favored to host a playoff game if they were in the AFC North or AFC South.

But while their defense is good, the gap between Mahomes and Bridgewater is just too great for them to seriously compete for a division title barring Chiefs injuries. 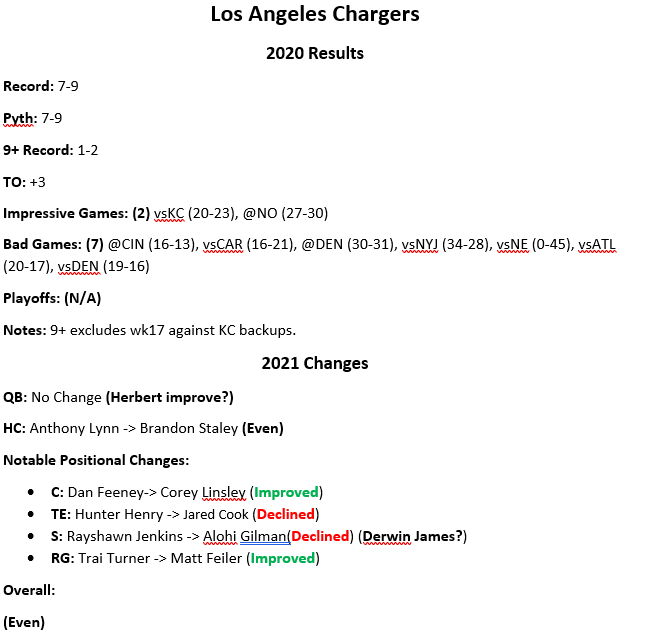 I was surprised when I did the Chargers overview. I thought they would have improved a lot more. I was even generous in including Feiler as notable. But in total there’s not a lot of reason to believe they’ll be much better than they were last year, barring Herbert taking a jump (which, to be fair, is entirely possible).

The impressive/bad games really highlights how they’re not nearly as good as they should be. Their best games were close losses, while they struggled to put away (and even lost to) a lot of bad teams.

They look to be solidly behind the Broncos, and will be lucky to get the 7th seed. 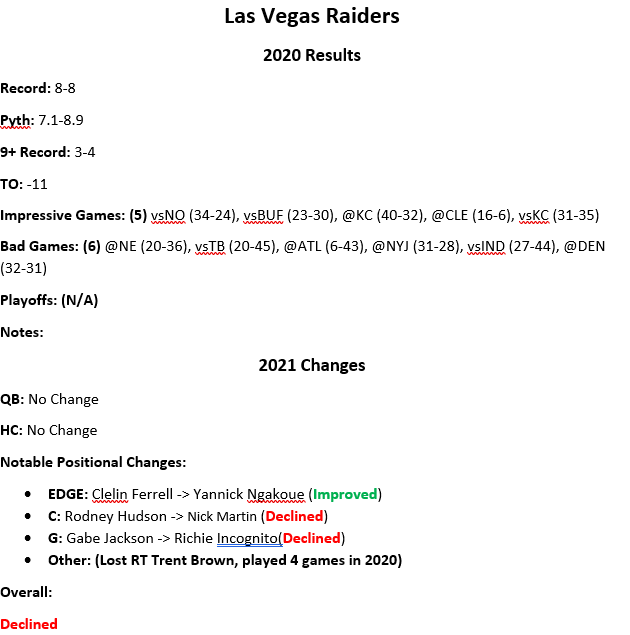 On the surface, the Raiders seem primed to improve. With a dreadful -11 turnover ratio and the addition of Ngakoue, improvement should be easy. But the Raiders being the Raiders, they were forced to lose a number of their offensive linemen this offseason, which is really bad news for them.

Derek Carr is one of those solid-but-not-great quarterbacks, but tends to be inconsistent. He occasionally has big games, but also has trash performances. This is due in large part to him struggling to handle pressure. When he’s protected he does great, but when the defense is getting to him, he’s prone to make mistakes.

Sorry, I know you wanted people to argue against your Broncos #2 pick. But honestly, I think you might be right about that.

Or, it’s probably notable, but you just can’t say in which direction yet?

Also one of our outside CB spots…unless they pull Breeland back in.

And maybe Pennell to Reed?

I am very conservative with those notable changes. Blythe isn’t good enough to note as a significant upgrade, and I don’t include rookies unless their 1st round QB’s or really highly drafted (like top 10).

Understandable. It would be pretty iffy to call any rookie a significant upgrade, unless that spot had literally nobody in it. And I don’t think any of us are ready to imagine a downgrade from Reiter.

I do think that our starting outside CB position is a notable change though, one way or the other, just because of the importance of the position. Although there’s a lot of uncertainty still on that.

The donkys in second? Yeah I don’t see it. The bolts are the biggest threat (which they aren’t) in the division. The donks and faiders will be competing for the cellar, which is how things should be.

Ya, I think that one could go either way, with the faders as always last..what really stings is losing to the Raiders last year.. WTF was that..

I am still convinced that Gruden spends all of his gameplanning time throughout the entire season concentrating on just the Chiefs.

I agree. It seems like he constructs the team specifically to beat the Chiefs, at the expense of all else..

Is it possible to get this article in braille? ?

I completely agree with you about Carr and the changes in their O-line. I’ve been surprised that hasn’t gotten more coverage and discussion by the pundits. It could be that Gruden and Mayock really have some backups ready to step up and fill in, but I don’t think you can base that on their history for the last few years.

Yep, I think that’s the big reason we struggled against them last year. We couldn’t get pressure on Carr and he was able to tear our defense apart. I don’t see that happening this year.

Carr was making perfect pre-snap adjustments against KC. They really had us scouted.

Could you define “Impressive Games” and “Bad Games” as I assume there is some numeric standard for this.

I would quibble with you on our tackle changes. I think Schwartz to Remmers/Niang is a downgrade until proven otherwise, I mean you’re going from a man with multiple All-Pro awards to a historically average tackle and an unknown rookie. Conversely I think Brown’s track record with ProBowls, especially getting them at both Tackle spots, rates him as an upgrade over Fisher. I think Fisher was usually underrated and Brown may have some struggles with what the Chiefs ask of their tackles vs. what he was used to doing, but at this point I think you have to give Brown the benefit of the doubt.

I explained these metrics in the AFC East preview:

Bad Games – The opposite of an impressive game, with the same rules applying. For example, the Chiefs 17-14 win over Atlanta counts as a bad game because they played a bad team close. These two measures are meant to account for strength of schedule and other factors.

I initially had RT as a downgrade, but since he only played 6 games and wasn’t 100% for most of them I changed it to even.

For LT, I put it as even because the idea is for these changes to only be noteworthy if they’re major changes. Brown may be a bit better than Fisher, but as of right now I don’t think it’s big enough to be a noteworthy change.

Another clarification on impressive/bad games, since it’s so subjective the exact numbers shouldn’t be taken too seriously. The counts are really more useful for a team like the Chargers where there’s a huge disparity.

This is what I don’t get about the debate over RT. Why is everyone assuming it will be either Niang or Remmers? If I’m not mistaken Long was selected to the Pro Bowl as a RT. Why wouldn’t we put him there, have LDT play RG if we keep him and let Niang play RT periodically (learn of the job)? Remmers is a solid backup but that’s it.

Last edited 1 year ago by probablyamistake
1

Hopefully Niang will impress and make this a moot point.

Also I’ve read somewhere that Long was not very good during his last season. Hopefully that’s just some spiteful Bears fan talking, though.

I’m also assuming that either of those are even with an INJURED Schwartz, because they aren’t against a healthy one. Way too early to call Niang even but I am hopeful. Right now, I consider that position a decline. The good news is the line as a group is much improved (hopefully)