As you may know, I like to dabble in sports betting. Since I take it fairly seriously, this offseason I’m going through every team and making notes on how they performed in 2020 and noting what changes they’ve made. Since I’m gathering this information anyway, I figure I might as well turn them into season preview articles. But since they’re just my personal notes, they can be a bit cryptic and hard to understand. So before I start I figure it’s a good idea to give a brief overview of what everything means.

Pyth – The Pythagorean win-loss record. This is based on point differential and does a better job of predicting future outcomes than actual record.

9+ Record – Record in games decided by 9 or more points, the idea being that these are games where one play wouldn’t have made the difference and give a better indicator of which team was truly better. It also helps give context to the Pythagorean record, since the Pythagorean record can be biased by one extreme outlier game.

TO – Turnover margin. Turnovers have a huge effect on the outcome of games, but are also pretty random. A team with a very good turnover differential is likely to see that regress to the mean and cause them to lose more games, with the reverse being true for teams with bad differentials.

Bad Games – The opposite of an impressive game, with the same rules applying. For example, the Chiefs 17-14 win over Atlanta counts as a bad game because they played a bad team close. These two measures are meant to account for strength of schedule and other factors.

Playoffs – Impressive and Bad games are just for the regular season, so this field is for notable playoff games.

Notable Positional Changes – These are any changes, other than quarterback or head coach (which get their own field and are always noted since they’re so important), that have a significant impact on the team. This doesn’t include swapping out role players, but instead should be a move that is going to have a real impact on the win-loss record of the team. The exception would be replacing a star player for a star player (for example, the Chiefs replacing Eric Fisher with Orlando Brown). Even though it doesn’t change much, I figure it’s still worth noting. Also, draft picks I typically don’t include unless they’re 1st round quarterbacks or very highly drafted. Outside those, the odds of them significantly impacting the team is too low for me to count on until they actually show it on the field.

Now to the actual preview. 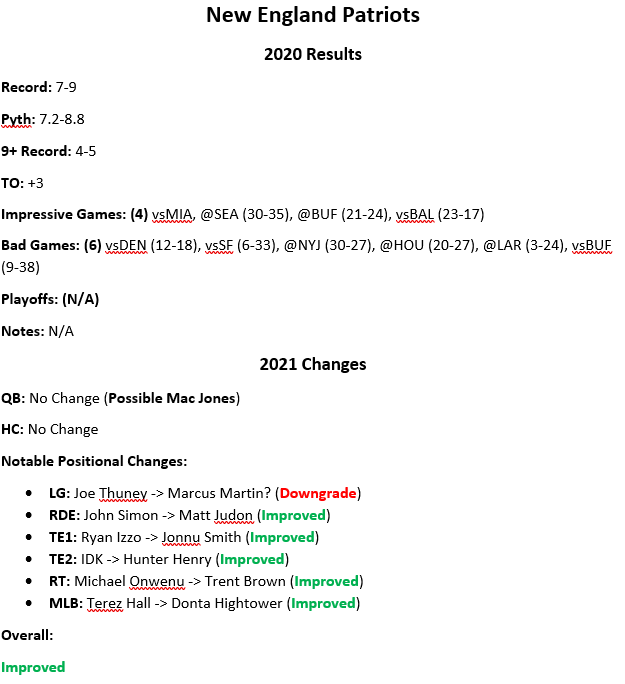 2020 was an impressive coaching job from Belichick, who took a roster equal to that of the Jets and won a respectable 7 games. Other than losing Joe Thuney they improved everywhere and will be at least the same at quarterback (and potentially better if Mac Jones ends up being good), so they’re the safest bet in the NFL to improve over last year. That being said, they still have a major issue at the quarterback position, and the only reason I put them over Buffalo is that I think Josh Allen will struggle against them. If the Bills can beat New England, they should win the division. 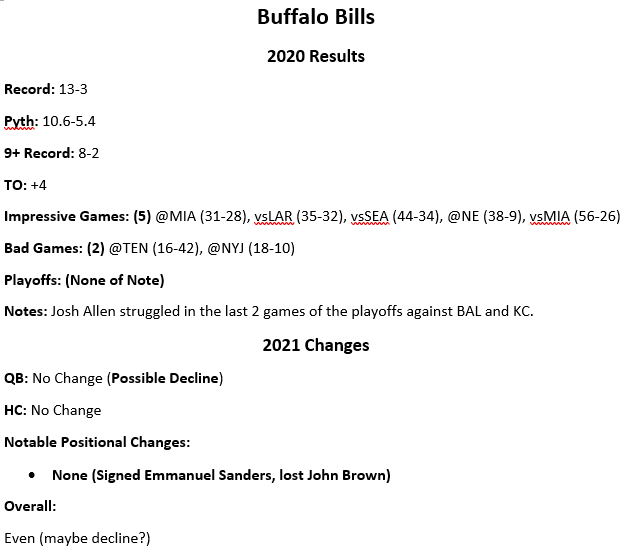 When I did the Bills I was surprised to see that they didn’t do anything major in free agency. The Chiefs lose the AFC Championship in overtime, and they go out and overhaul the roster. The Bills get blown out, and they apparently think they’re all set. Regardless, the Bills were a good team last year and should be a good team this year. The only question is if Josh Allen can maintain his high level of play from 2020. When watching him it’s clear he’s made very real improvement over his first two seasons, but it’s equally clear that his statistics overstate how good he is. I expect a bit of decline, but he should still be solid, and the Bills should still easily make the playoffs. 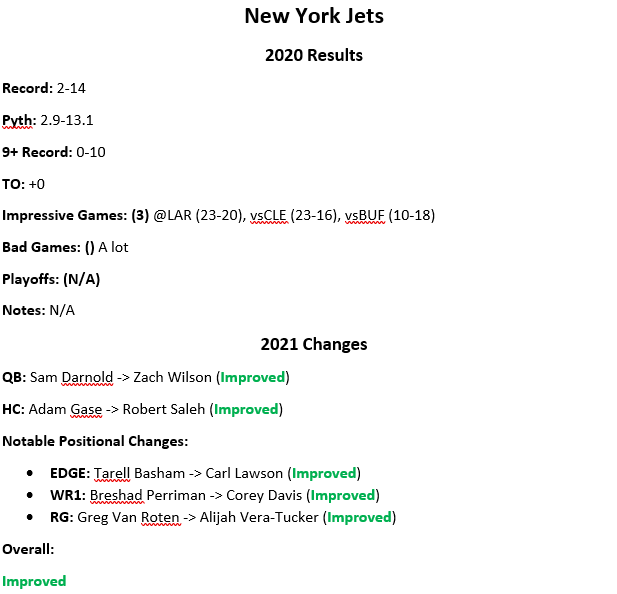 The Jets are one of the big mysteries of the 2021 season. There’s no doubt they’ll be better than in 2020, but just how much better? Personally, I think Gase and Darnold are both absolutely terrible, while I really like Wilson, so I think they’ll be a playoff contender. 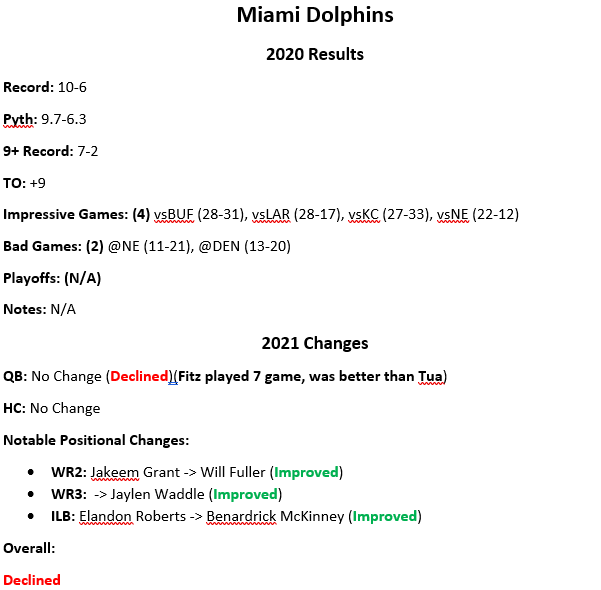 Initially I had the Dolphins marked as improved, but their turnover margin (one of the best in the NFL) and Tua’s very subpar rookie year made me reconsider, and now I think they’ll actually decline. Those are two very powerful forces, and more than enough to overcome the other improvements they made. I would like to say their receiving corps is excellent though. They already have criminally underrated DeVante Parker, and Will Fuller is one of the better receivers in the NFL when healthy. Then they drafted Waddle 6th overall, who can be at least a gadget player with his speed. Tua has no excuse not to excel with those weapons.

I like the Metrics used for your analysis …Nice Work ! … ; )

The text is very small on mobile.

Thanks I’ll double check that for the next one.

There isn’t much separation between the Bills, Patriots, and Dolphins. I think the Bills will regress some. The Patriots need to put Mac Jones in if they want to make a playoff push. The Dolphins should be better with their new offensive coordinator.

Then there are the Jets.

I think overall in general this was a good idea for a topic. I’ve been around so many people that talk gambling when it comes to sports and football. Especially since it’s legal in many cases now. I’m not the best with gambling and fantasy football, that’s when hope and optimism will make you bankrupt. However, I like the topic. With the AFC East. I think the Bills have the best team right now, while the Patriots have the best coaching staff and a QB solution, potentially with either Cam or Mac. But no matter how they combine those three letters it’s not T-O-M and that matters in that AMC movie: Patriots. The Dolphins are the wild card, they have a lot of talent. Is Brian Flores the guy to do something with it? Is Tua the QB that will lead them there? Those are tough questions, but I don’t see that team as ready to take it to the next level. And then the Jets are tearing it all down and rebuilding again with another QB. Unless you’re betting on who’s going to lose, I wouldn’t take the Jets. And the Jets are the type of team that would win just because you bet on them losing.

Bills are way better than Pats right now, and Pats aren’t as good as Dolphins … all of which is my uneducated opinion

good stuff, I like it, well done and did

Maybe it’s in part the product of a fairly general belief that Tua’s not a good QB and won’t get them the ball with any regularity. I don’t agree, because he didn’t get any pre-camp work done last year, either. Plus a small sample size, so the database on him is both small and corrupted. The conventional thinkers don’t care about either factor, and have forgotten what GIGO means.

You simply cannot take a batch of bad data and derive anything meaningful from it, all you’re doing is misleading yourself because of the unaddressed false readings that lurk within an assemblage including seemingly accurate values.

By Tony Sommer 16 hours ago