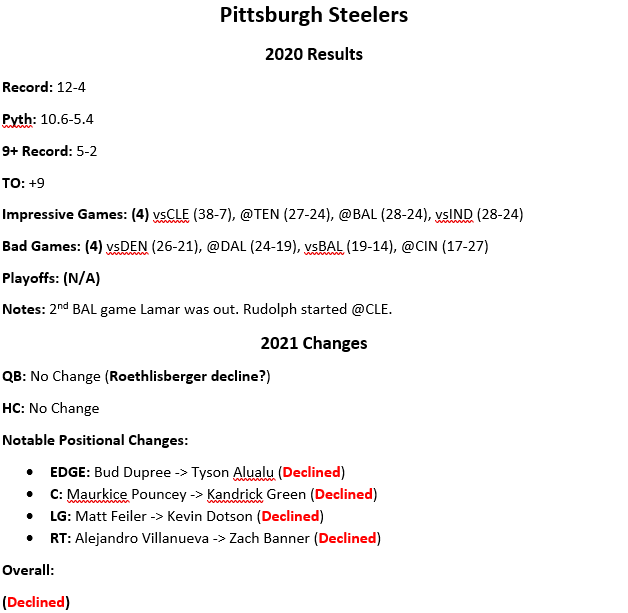 This is a hard division to call, and not because it’s good. It’s not an exaggeration to say the worst AFC East team might be better than the best AFC North team. I’m going to go with the Steelers as the least-bad, if only because they were the best last year and Lamar Jackson has a history of struggling against them.

One thing that I found interesting was that Roethlisberger was actually better statistically than I thought. He had an ANY/A+ of 100, which means he was exactly average. But that’s also the problem, as this was boosted by an NFL-best sack percentage. As you can see the Steelers’ offensive line took a major hit, and if his sack percentage dips below average his overall statistics will be a disaster, which means the team will be a disaster. 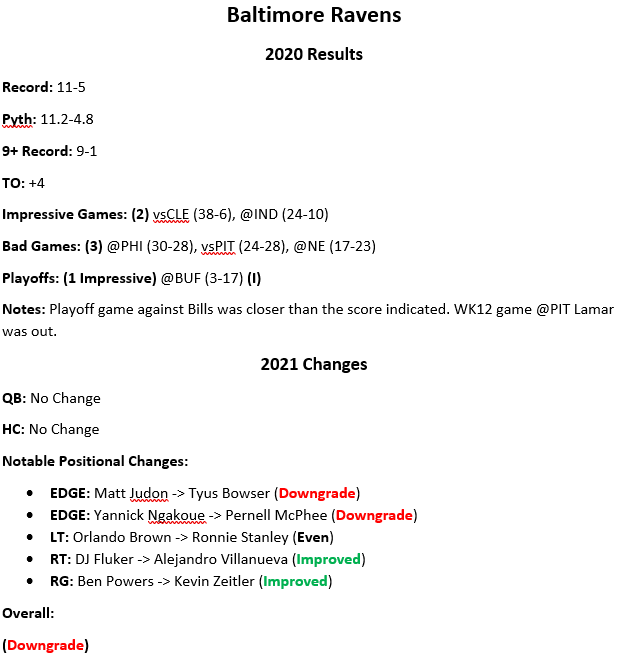 The Ravens have looked good under Lamar Jackson when it comes to things like point differential, but if you read my power rankings during the season you know I’m always skeptical of them. After doing this more formal analysis I can see why, as for all their point differential they have very few actually impressive wins. And I’m not just being a hater and excluding stuff, note that I include their 3-17 loss to the Bills in the playoffs as impressive because the game wasn’t as bad as the score made it look.

I was also pretty generous in marking Villanueva and Zeitler as upgrades, as they’re not really the caliber of players I typically have in mind for this. But since they were both on the offensive line I thought it was important to note given that they lost Orlando Brown, on the surface a Chiefs fan like myself might assume their line declined. Instead, in addition to those two, Stanley returns from injury to take back his left tackle spot.

But the reason I am very low on them is because of the loss of Judon and (to a lesser extent) Ngakoue. This loss of pass rush will cause a domino effect that will ripple through the team. To understand why, first let’s talk about their 2019 defense. As I explained in my week 1 power rankings last season:

The Ravens had a very good defense last year, ranking 5th in the NFL in expected points added. This performance was almost entirely on the back of the secondary, with their front having a very average 23.4% pressure rate (good for 15th) despite blitzing far more than anybody else (54.9%, only Tampa Bay was even above 40%). Blitzing always is a Sophie’s choice, if you blitz it can lead to easy quick passes, if you don’t the QB can have all day to find a receiver. But that choice is made easier when the secondary can hold during blitzes like the Ravens’ could. Without Thomas the secondary will have far less margin for error when asked to defend during blitzes.

As you can see they did nothing to improve their secondary, so what will happen now they they lost multiple good pass rushers? The obvious answer is that, without the 2019 secondary, their overall pass defense is going to decline. Either their pressure rate will go way down, or they will blitz more and their secondary won’t be able to handle it the same way it did in 2019.

But it gets worse. The Ravens are uniquely built for converting short fields into points, while struggling to put together long drives. If you look at how often a team has a 70+ yard drive when starting on their on 30 yard line or worse, you would figure good offenses would do better. And that’s what happens, in 2020 the Chiefs were the best in that category while the Broncos were the worst. The Ravens, on paper, have a good offense, being 7th in scoring last year, but were 22nd in putting together long drives when given poor field position.

Guess what happens when your defense isn’t as good? You get a lot more drives starting deep in your own territory!

It’s because of this domino effect that I put the Ravens below the Steelers. 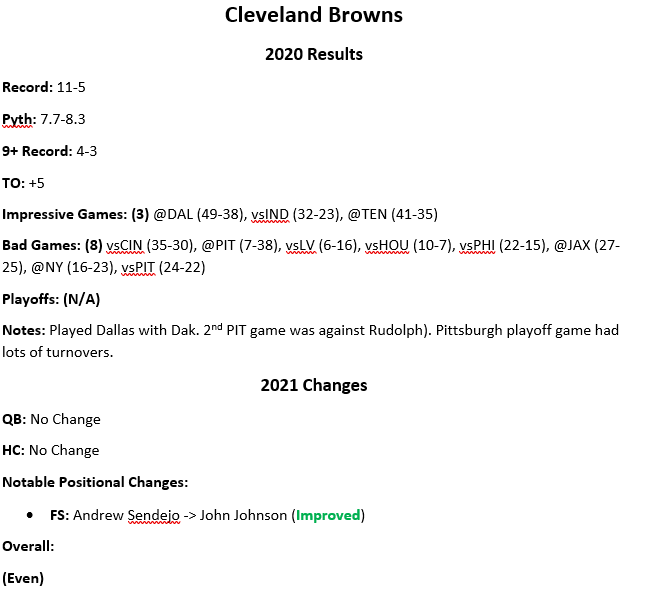 The Browns had a good record, won a playoff game, and made the Chiefs sweat in the divisional round. Given that I have the Steelers and Ravens declining, they should be the choice to win the division, right?

The problem is that they had a negative point differential, and tons of bad games. And they got lucky in the playoffs, with the Steelers committing tons of turnovers and Mahomes getting hurt.

They should be good. They have tons of talent, and occasionally show flashes, but it’s hard to believe in them until they actually show it on the field. 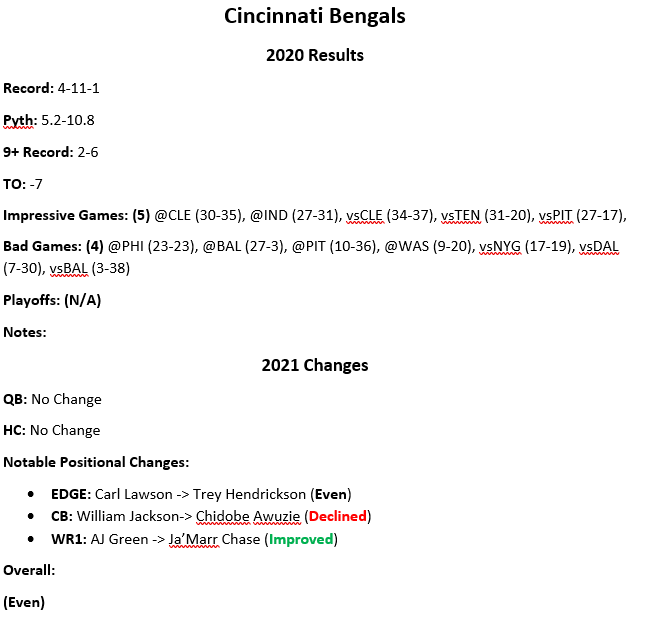 It’s shocking how little the Bengals did to improve their team given that their have a quarterback entering the second year of his rookie deal. This is usually the time when teams, flush with cap space and having a newly veteran quarterback, spend like Al Davis and surround their guy with talent.

Instead they actually lost talented players in Carl Lawson and William Jackson. Their only improvement will be Ja’Marr Chase, and even that assumes he’ll live up to his draft spot. If this is what the Bengals are going to do when they’re in a prime spot to build a contender Mike Brown should just sell the team and let somebody who’s interested in winning run it.

Good write up. I like your take on Baltimore. Great at grinding out short yards, not so great at multiple long drives. The wear and tear wears and tears on them. Thanks for doing this. It’s interesting each time.

This division has some seriously passionate fans with the Steelers and the Browns. They will argue their teams into the ground if they’re even showing a modicum of success, Steelers fans slink away quickly while Browns fans will take it on the chin even when the team melts down. I think the best thing about the Ravens is that they were willing to give the Chiefs Orlando Brown. They are going to be a good team, but I think they will be hurting on defense with some of the changes they’ve made. With the Bengals, I like the give the QB his favorite wide receiver approach, but they need a few more pieces before they’ll even be able to tackle the Steelers and Ravens. With this division, it’s usually Big Ben and the field. But I think the Browns added enough on defense that they’ll be the darling of the league after they hang with us week 1 and then go on a winning streak.

I love this format.

Cleveland’s big problem is OBJ. He’s a good player, but unfortunately he’s not just a player for the Browns but also influences that team’s character with his own self absorbed childishness. The Browns could make a big addition by subtracting him.

Steelers/Ravens is always hard to call, but I’ve got a feeling that last year’s thin 1-game margin in the standings flips the other way this year. Ben is getting a little worse every year, and as he goes so goes his team.

Oh, and the Bengals. I’d love to see Burrow succeed, but like you point out it doesn’t look like that team is being managed well enough to let that happen.

He’s basically an NBA star who is too short to play basketball professionally.

Surely based on your own criteria the Browneyes should decline.

The assumption is that the Browns weren’t that good last year.

I’m a go with Ravens & Browns (in no particular order) with Steelers hot on the trail, followed by Cincy

I would give it to the Browns this year but Pittsburg just seems to always come out on top for one reason or another.

The stealers really fizzled at the end of the season. Did they even win a game after Alex took them down? I don’t think they did, and if I’m not mistaken roethlisberger was the reason. For them to have any chance he needs to play well. Lamar is Lamar, I don’t see him really improving. IMO, the browns are the team to beat in that division, but who knows?

There was a thing where they struggled against the Ravens the week before, then when Washington smoked them they said they had a tell on offense, and they struggled another couple weeks scoring points. Then in week 16 they must have figured it out because they beat the Colts then scored 22 and 37 points against the Browns in week 17 and the playoffs.

I could totally see the Browns, this is the hardest division to call (at least in the AFC, I haven’t looked at the NFC yet).

Before doing this I forgot the Browns had a negative point differential. That’s almost impressive to go 11-5 while getting outscored.