So I won the arrowhead fantasy league and i realized most of you probably thought i was a bot. I don’t add many comments here, and so none of you really know me. I thought i’d introduce myself a bit so you’d know you were beat by an actual person.

First though lets recap the season. My best pick in the draft was McCaffery for sure. I was able to hit on and keep a strong majority of my lineup from the draft. My favorite pick though was Ekeler. If you remember Gordon was holding out and most people thought he would return in a couple weeks. So Ekeler was thought to be a short term rental. Being a Chief’s fan i have seen a lot of Ekeler, and i gambled on him grabbing that starting job and keeping it. I did draft Gordon later for insurance but he never made the starting lineup. Ekeler started for me all year and combined with McCaffery formed a strong duo that i rode to the promise land.  The championship game was a bit of a let down as neither team performed very well. Bring on next year i’m ready!

Player that really hooked me as a fan: Deron Cherry

Found the site by: Followed over from the sensitive site.

Been lerking in the shadows of the two sites for: 10+ years

Least favorite poster: HIVElway (or however he spelled it) similar to Saints but with less filter and less knowledge. Probably a Donkey spy.

What side of the Alex Smith fence?: I thought he served a purpose and feel like Andy got everything he could out of him. Alex the man is a good dude. Alex the football player is a stabilizing force for a team in transition.

Where do you live: I’ve been in San Antonio for 12 years, born and raised in Shawnee KS.

Current feelings on the team: Definitely support the Suggs signing. I like what we have seen from the defense but our LB’s are still the same guys. They still scare me against offensive teams like the Titans (Henry) and the Ravens (all of them). Not sure if anyone has noticed but it looks to me like Wilson’s roll has been reduced a lot. Not that the other options are great but that guy is a major liability on the field. Also why is Bell the number 2 TE? his hands are Harris-ish and his blocking is ehhh. I do feel like we have a better team going into the playoffs this year then we did last year. I love to see the aggression in the defensive play calling. Okay that’s probably more than enough. I’ll try to start posting replies, no promises though. 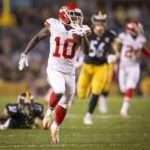 Just ran across this. Just wanted to thank you for the post and congratulate on winning the fantasy league. More participation is better than less, as far as the future of AG goes, so I’d encourage you to continue.

Yikes! I remember that person from back in the day.
Glad to see you made this and congrats on your fantasy victory!

HIV2Elway, as I recall. As for Bell, I presume he was the best available player/price point and that they thought he’d be better. That plus by the time either they realized he had topped out or a better TE2 became available at an acceptable price they had gotten to the point where Bell knowing the scheme outweighed any talent bonus they could bring in and would have to learn the scheme from scratch.

Welcome to the daylight, Bruner, but if you prefer dimmer lighting for your activities, the Afternight awaits. 😉