If you really think about it, the law of averages says that the Raiders had to beat the Chiefs at some point. The fact that we’re living in the alternate reality that is 2020 made things just right for them to pull it off. I say alternate reality because one struggles to think of what reality that Jon Gruden and Derek Carr finally decided that this would be the time that they decide to attack the Chiefs downfield and use their newfound speed to their advantage.

The fact that the Raiders had never thought to deploy this game plan had remained a shock to those of us who watch film for quite some time. Whether it was because they didn’t feel confident in it, or they did game plan to do it but Carr never pulled the trigger is a question that only the Raiders can answer, but they finally executed it, and they absolutely dissected the Chiefs’ secondary down the field.

This is a good rep from Fenton out of Cover 2. Good depth and good eyes, just a hell of a play from Ruggs pic.twitter.com/QY18rtw4LI

Things started early with the Raiders down the field. The Chiefs deploy a ton of cover two looks, and they’re in it on this play. Right formations can be a bit tricky to defend when you’re in cover two because of the variety of releases receivers can get and how teams can attack the safety and corner. On this play all the Raiders need to do is keep Ward from dropping too far into coverage, and they can give Ruggs a shot at a jump ball. Ruggs has a vertical route and Ward has to carry him as far up the field as he can until he sees a route enter his zone. The middle slot receiver gets to Ward’s depth and turns as if he’s running an out route, and it holds Ward just enough for Carr to throw the jump ball to Ward who makes a great catch over Fenton who ended up in a pretty good position to make a play on this ball.

Derek Carr totally saild this ball and it was a throw he should have made but watch Breeland with the perfect hip turn in cover 3 pic.twitter.com/muU5hwIQGE

The Chiefs are glad to have Bashaud Breeland back in the lineup even if he did struggle as much as everyone else in the secondary did on Sunday. Here he makes a superb play to come up with this interception, even if Carr did sail this ball that was a very complete-able pass. Chiefs are in another cover two variation with a robber safety that they like to use over the middle of the field. As mentioned earlier Breeland can only carry a vertical so far up the field until someone else enters his zone. He does a good job carrying up the field to the safety and catches Waller crossing into his zone. He shows good hips and is able to turn and run and stay in stride with Waller and comes up with the interception on the overthrow.

The Chiefs are glad to have Breeland back in part because he’s a veteran and has a ton of experience, which at the corner position the Chiefs don’t have a ton of. He’s also one of the best tackling corners on the team next to Rashad Fenton. He needs time to get his feet underneath him, but unfortunately with Ward playing with one hand and L’Jarius Sneed out with a broken collar bone he’s not going to be afforded that feeling-out period this season.

The Raiders actually drew up a pretty good play here vs Cover 3. The motion widens everyone out and with now vertical on the short side Ward can't get a ton of depth off the snap and Agholor just uses his speed and space to score pic.twitter.com/BSgCpd0uJ6

I mentioned earlier that the Raiders drawing up shots down the field was not something that was anticipated Sunday and it shows here. The motion pre-snap changes the secondaries count on the short side, add in the route that the inside receiver runs and you end up with a concept that looks a lot like something the Chiefs do to other teams all the time. The dig route that the tight end runs pulls down to him and gets him out of the deep part of the field, and that puts Ward and Mathieu in a bind. Ward has the deep third of the field but with nobody on his side occupying his zone he doesn’t have a reason to keep backtracking and Agholor running the backside post can essentially just run away from Mathieu and Ward doesn’t have enough time to get back in time to try and make a play on this ball. A really well drawn up play by the Raiders.

This is demoralizing. Third down, chance to get off the field. Clear miscommunication between Thompson and Thornhill. Thompson crashes down but Thornhill doesn't replace him and stays wide vacating the zone pic.twitter.com/dq6mkXtRC5

The big plays weren’t all due to the Raiders play calling. Some of it was self-inflicted wounds by the Chiefs especially on the money down which is uncharacteristic of the Chiefs because they are a really good situational defensive unit. The Chiefs have the Raiders in third and long, they get a stop here the offense comes back on the field with a chance to try and take control of the game.

Chiefs don’t do anything different from what they’ve done in the past, with a cover three look and Tedric Thompson as the robber. The only problem is when Thompson comes down on the receiver in the middle of the field Thornhill doesn’t replace him and they end up vacating the entire zone. Thornhill doesn’t need to widen out as he did because anybody that would threaten vertically can just be taken by the corner on that side. If Thornhill shifts to the middle of the field when Thompson crashes down that dig route isn’t open and the Chiefs get off the field on third down. 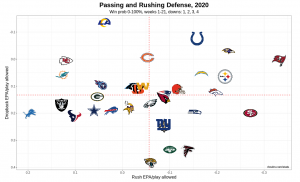 Even after getting taken out behind the woodshed the Chiefs defense is still sixth in the NFL in dropback EPA on all downs, but they’re still getting absolutely decimated overall on early downs. As for DVOA they dropped from fifth overall in the NFL to ninth, but they’re still second in pass defense DVOA. What does all of this mean? It means that the Chiefs don’t need to panic, their secondary is still elite, and they’re going to be just fine. They genuinely had to have been caught off guard by how Carr pushed the ball down the field as often as he did. It’s no excuse, but it definitely could not have been what they were expecting coming into the game. Now they’ll have to deal with Josh Allen, who the Chiefs should be able to trick into making mistakes whether it be coverage disguises or blitzing more often to force Allen into making quick decisions.

hoo boy, ain’t THAT the truth!

I think it’s safe to say that if Bob Sutton was still around, just about everyone on AG (and others across Chiefs Kingdom) would be excoriating him up and down for now having the Defense ready …

The Chiefs Defense Has Snow Game Guys Too 2 replies

Mitchell Schwartz and Sammy Watkins are out Sunday.

This would be fine.

If I’m in the Chiefs shoes, I keep Watkins and Schwartz out until after the bye week. See you Raiders week. You want them healthy and fresh for the run. They can get to 8-1 without them.

Sammy Watkins (hamstring) is not expected to play Sunday vs. Jets, per source. Chiefs will give playmaker another week to heal up.

And my latest video from RGR! Make sure to check it all out! Lots of content coming your way!

By Chief for Life 2 days ago