I don’t know about you, Arrowhead Guys, but this particular Kansas City Chiefs fanatic forgot that a Chiefs loss can affect my positivity throughout the week.

Can longtime Chiefs fans relate to the notion that you got so used to winning, especially during the decades long off-season that was -2020- sans football (At least we’re Super Bowl Champions, right?). That perhaps you also completely forgot about the mood swings that accompany the L word (not that L word): LOSS. I was at a loss that a loss could still create that kind of “loss” of positivity. I thought the Super Bowl medicine the Chiefs prescribed us all last season cured that disease. Nope.

At work, I’ve dealt with the same tiresome garbage I’ve dealt with any other work day. Yet, this Monday I took it all more personally than usual and I had no idea why, but now I understand. It’s because the Chiefs lost to the Raiders-Refs at home with Charles Davis cackling in the background like the guy that ran over Happy Gilmore with a Volkswagen. Obviously, it makes sense now, but I just didn’t factor it in until the trail of dead bodies left behind began to pile up like weekly garbage when you don’t meet the deadline of trash day. Thanks, Raiders-Refs, now all these innocent folks are dead. You happy now?

Arrowhead Guys, I hope you’ve had an easier time coping than I have. It’s just one loss, there’s no reason to be a serial killer or suicidal. Just pop in the Super Bowl, watch it, and realize the Kansas City Chiefs can do better. They’re 4-1 now! Andy Reid shouldered the blame like a pizza delivery guy that accidentally ate half your pizza on the drive over and promises to do better next time. I believe him.

In years past, I would wax poetic about how the Chiefs are going to come back strong, pull together and win the Super Bowl. Strengthening your delusion, watering your hope and inevitably letting you down. This year, it’s unnecessary. The Chiefs talent surpasses my blind delusion with their actual Super Bowl rings. I don’t need to sell you on their chances of winning. Not at all. After this loss, I’m just suggesting that maybe that baby that flew over your head like Ike from South Park. Only gained the ability to fly because a Chiefs fan temporarily forgot that a loss can negatively affect our entire week. Even with a Super Bowl victory in our rearview mirror.

So remember, when you’re biting someone’s head off at work, cutting someone off in traffic or starving your pets because they’re black and white, resembling a Raiders-Ref. Keep in mind, the Chiefs lost a football game. It used to be the most stressful thing ever, turns out–It still is. 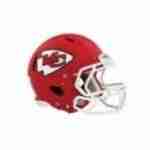 Ya, this one hurt a lot. Not sure if it was the fact that we haven’t lost a game in forever. Or that we looked like we were going to kick there ass at the start of game..
But know matter what it was , it truly sucked!!!!!!!and I am not looking forward to that feeling ever again..Fricking Raiders..

Last edited 8 days ago by rip58lovealways
1

welcome aboard, Son … good to seeya (at my age, it’s good to see anyone)

oh, and don’t take all the losses (or wins) personally … and hoo boy, the Raiders came to play and props to them for that, they played very well (unlike KC) … personally, I hope Chiefs fans (everywhere) can stop with the whole “Mahomes is a GOD” thing and realize that he’s actually human (I know it’s a shock, but it’s true)

Ups, the Raiders did play well. It was their Super Bowl. They even did victory laps around Arrowhead after the game in their busses. How quaint.

And speaking of Super Bowls, the Chiefs finally won one. So after about #15 years, I finally get to say… Told you so!

The Chiefs Took What The Bills Gave Them 5 replies

By Daniel Harms 13 hours ago

Instead of the overplayed Thunder & Lightning, I like "Slip and Slide" better

You get a QB-TE combo. Who you taking?