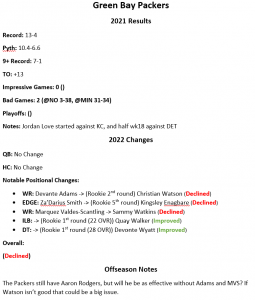 The Packers got a chunk taken out of them in the offseason, but as long as they have Aaron Rodgers under center, they should have no problem winning this sorry excuse of a division. 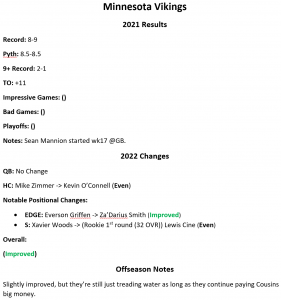 The Vikings apparently still haven’t learned the errors of their ways. Kirk Cousins can win you some games, but as long as they keep using such a large percentage of their cap on him, they’re going to have a hard time competing. 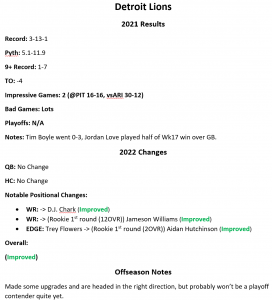 I bet the Lions are going to be a popular dark horse team, since they managed to come on late and had a nice draft. They have a chance of actually being decent, but it’s best to temper expectations until they actually start winning some games. 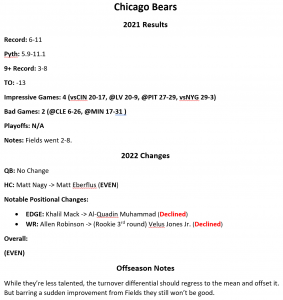 Maybe I’m a bit too negative on the Bears, but when you have a 2nd year quarterback on a rookie deal, you shouldn’t be losing talent. They should have been major players in free agency, instead they’re less talented than last year and will have to depend on either Fields turning it around or turning their turnover differential around just to tread their mediocre water.

I’m going 1) Packets by default. 2) Lions with the last place schedule. They were more competitive last year than their record would indicate and they have some continuity this year. If some of their many picks work out they could be okay. 3) Bears by default 4) Vikings, this is the year the team completely quits on Cousins.

Interesting, I wouldn’t be shocked.

I have a soft spot for the Lions ever since attending a couple games at the Silverdome and watching Barry Sanders play. Hutchinson and Williams should be a great picks for them, but the Lions have fumbled around for so many years trying to build a complete roster without success that it’s hard to believe they might be turning a corner (don’t tell HC Campbell that).

A lot of people will be rooting for them this year. They’re very likable.

they are likable, they just aren’t aren’t very good … although they MIGHT reach “mediocre” if they’re lucky