Introducing Division Previews (and an explanation):

As you may know, I like to dabble in sports betting. Since I take it fairly seriously, this offseason I’m going through every team and making notes on how they performed in 2021 and noting what changes they’ve made. Since I’m gathering this information anyway, I figure I might as well turn them into season preview articles. But since they’re just my personal notes, they can be a bit cryptic and hard to understand. So before I start, I figure it’s a good idea to give a brief overview of what everything means.

Pyth – The Pythagorean win-loss record. This is based on point differential and does a better job of predicting future outcomes than actual record.

9+ Record – Record in games decided by 9 or more points, the idea being that these are games where one play wouldn’t have made the difference and give a better indicator of which team was truly better. It also helps give context to the Pythagorean record, since the Pythagorean record can be biased by one extreme outlier game.

TO – Turnover margin. Turnovers have a huge effect on the outcome of games, but are also pretty random. A team with a very good turnover differential is likely to see that regress to the mean and cause them to lose more games, with the reverse being true for teams with bad differentials.

Bad Games – The opposite of an impressive game, with the same rules applying. These two measures are meant to account for strength of schedule and other factors.

Playoffs – Impressive and Bad games are just for the regular season, so this field is for notable playoff games.

Notable Positional Changes – These are any changes, other than quarterback or head coach (which get their own field and are always noted since they’re so important), that have a significant impact on the team. This doesn’t include swapping out role players, but instead should be a move that is going to have a real impact on the win-loss record of the team. The exception would be replacing a star player for a star player (for example, the Chiefs replacing Tyrann Mathieu with Justin Reid). Even though it doesn’t change much, I figure it’s still worth noting. Also, draft picks I typically don’t include unless they’re 1st round picks

Now to the actual preview. 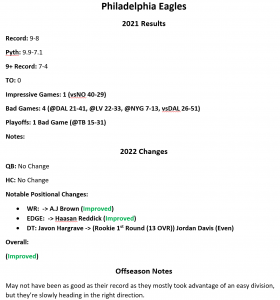 Both the Eagles and the Cowboys had inflated records last year from having easy schedules. As you can see, the Eagles only had one impressive game. So I wouldn’t be surprised if both teams disappoint, even though the Eagles should actually be better.

As for picking the Eagles over the Cowboys in the division, it’s super close. The Cowboys completely owned them last year, and another sweep could give the Cowboys the first back-to-back NFC East titles since the Andy Reid Eagles won it 4 times in a row from 2001-2004. 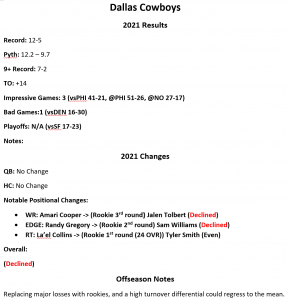 While the Eagles took a step forward this offseason, the Cowboys took a step back. They lost Amari Cooper and Randy Gregory and replaced them with 2nd and 3rd round draft picks. Now, it’s not the end of the world if these rookies end up being good, but given their draft position, chances are they’ll be major downgrades. 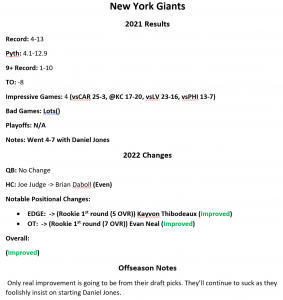 I don’t really understand the Giants’ strategy. Are they just continuing to tank until they have an opportunity to draft a quarterback of the future? Or are they really so delusional that they think Daniel Jones is a long term answer?

Either way, it will be another long year for New York. 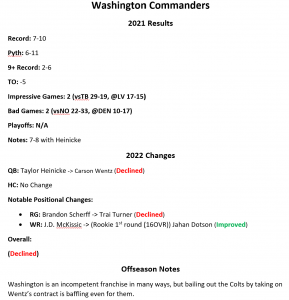 Carson Wentz actually did a bit better than I expected last year with the Colts. But he still sucked, so when the Commanders came knocking and offered to pay them to take him off their hands, they jumped at the opportunity.

For Washington, this move makes no sense. If you’re trading for a guy, you need to get a guy who can put you over the top. Otherwise, you’re just wasting draft capital you could be using to rebuild.

Love the format efficient and straightforward way to get information across. I noticed that many of these guys’ impressive games are against LV. What does that say about LV, maybe they are a little overrated?

Interesting point. During the season I always thought they were overrated, and taking a quick glance they don’t have many impressive games themselves (the best being that 33-22 win over Philly or a 9 point win over Pittsburgh).

They did have a negative point differential, but that’s only because of he 2 games where we smacked them around. In the other 15 games they’re slightly in the black.

Dallas’s extra games Bucs, Bengals, and Rams all within the first 5 games.

Mutual schedule games they play include the crappy NFC North and even crappier AFC south.

I could see both teams making the playoffs due to weak schedules but Eagles win the division due to much easier noncommon opponents.

yup … Dallas is decent, the rest of ’em … well, whatever

RB Jerick McKinnon returning to the Chiefs on a one-year deal, per source.

Glad to have him back ….

Last year I did AFC first, but obviously I should do NFC first so the AFC West is last.

as it should be, save the best for last …

good observations, love how “technical” you get (NY Giants: Bad Games – Lots!) … yessir, ya nailed it right there

Yep. My theory is that the whole point of impressive/bad games is to see if maybe the team isn’t as bad/good as all the other numbers make them look (i.e. they have a negative point differential, but it was really just one bad game and they had a couple impressive showings), so if I can see at a glance that a bad team has lots of bad games there’s not much point in doing the work to detail all of them.