Chiefs(7-4) remaining games: Raiders,Patriots,Broncos,Bears,Chargers
I could see us losing to the Patriots and beating the Broncos and Bears.
If so, it comes down to how we do against Chargers and Raiders – win 1 out of 2 and we’re 10-6 with a chance at the playoffs,
The danger is that both the Colts and Texans could plausibly end up 10-6 and they would own tie breakers over us.
4 out of the remaining 5 games are against AFC teams (3 in the division and the Patriots).
There is a remote possibility to get into the playoffs going 9-7, but ONLY if one of our losses is to the NFC Bears.
Otherwise, losing 3 games to AFC teams means we are out of the postseason.
You know, it is not the rest of the schedule that concerns me about the Chiefs, they are capable of beating all of their remaining opponents.
It’s that they have been so inconsistent and that that will hurt them given they are playing capable teams the rest of the way.

Chargers(4-7) remaining games: Raiders,Chiefs,Broncos,Jaguars,Vikings
The Chargers now have 7 losses and are out of the playoffs. They should beat the Broncos and Jaguars.
Even if they are a longshot to go to the playoffs, they still will have a large impact on the division race.
It would be nice if they beat the Raiders…

Raiders(6-4) remaining games: Jets,Chiefs,Titans,Jaguars,Chargers,Broncos
I could see the Raiders beating the Jets,Jaguars and Broncos.
Then it comes down to how they do against the Chargers,Titans and Chiefs. Win 2 of 3 and they’re 11-5 and in.
The game with the Chiefs is very important to the division

Steelers (5-5) remaining games: Bengals,Browns,Cardinals,Bills,Jets,Ravens
I could see the Steelers losing to the Ravens, beating the Bengals and Jets.
With the loss to the Browns on Thursday, I can no longer assume they beat the Browns when they play them in Pittsburgh.
How will they fare against the Cardinals,Browns and Bills? They’ll need to win all 3 to go 10-6.

Bills(7-3) remaining games: Broncos,Cowboys,Ravens,Steelers,Patriots,Jets
Losing to the Browns was a blow for the Bills playoff chances – still doable but less likely given their schedule.
I think they get beat by the Cowboys,Ravens,Patriots.
I think they beat the Broncos and Jets.
If they beat the Steelers they go 10-6 and have a shot at the playoffs, lose and they go 9-7 and will miss out.

Texans(6-4) remaining games: Colts,Patriots,Broncos,Titans,Buccaneers,Titans
This division is muddled right now. Could a 9-7 record win the division?
I think the Texans beat the Broncos and Buccaneers.
They likely lose to the Patriots.
That leaves their two games vs the Titans and one against the Colts. Win two and they’re 10-6.
If Colts are one of those two Texans could win the division.

Colts(6-4) remaining games: Texans,Titans,Buccaneers,Saints,Panthers,Jaguars
Brissett looked good today.
If he stays healthy they likely beat Jaguars,Buccaneers and Panthers.
Likely lose to the Saints.
That leaves the Texans and the mystery Titans – win one and Colts go 10-6 with a shot at the playoffs, lose two and go 9-7 and out.

Titans(5-5) remaining games: Jaguars,Colts,Raiders,Texans,Saints,Texans
The remaining schedule is a rugged one for the Titans. Lose two and they likely miss the playoffs at 9-7.
They will certainly have a big impact on how the playoffs shake out in the AFC.
Colts,Raiders and Texans all have playoff ambitions and can’t really afford to lose to the Titans.
As far as the Chiefs are concerned it would be fantastic for the Titans to lose to the Jaguars and Saints
and beat the Colts,Raiders and Texans(twice).

Jaguars (4-6) remaining games: Titans,Buccaneers,Chargers,Raiders,Falcons,Colts
With the 20-point loss to the Colts the Jags are on borrowed time. One more loss and they’re done.
And Foles did not look particularly good.

Links to the two simulators I’m using are below. Customize your predictions for the rest of the season.
ESPN
NYTimes 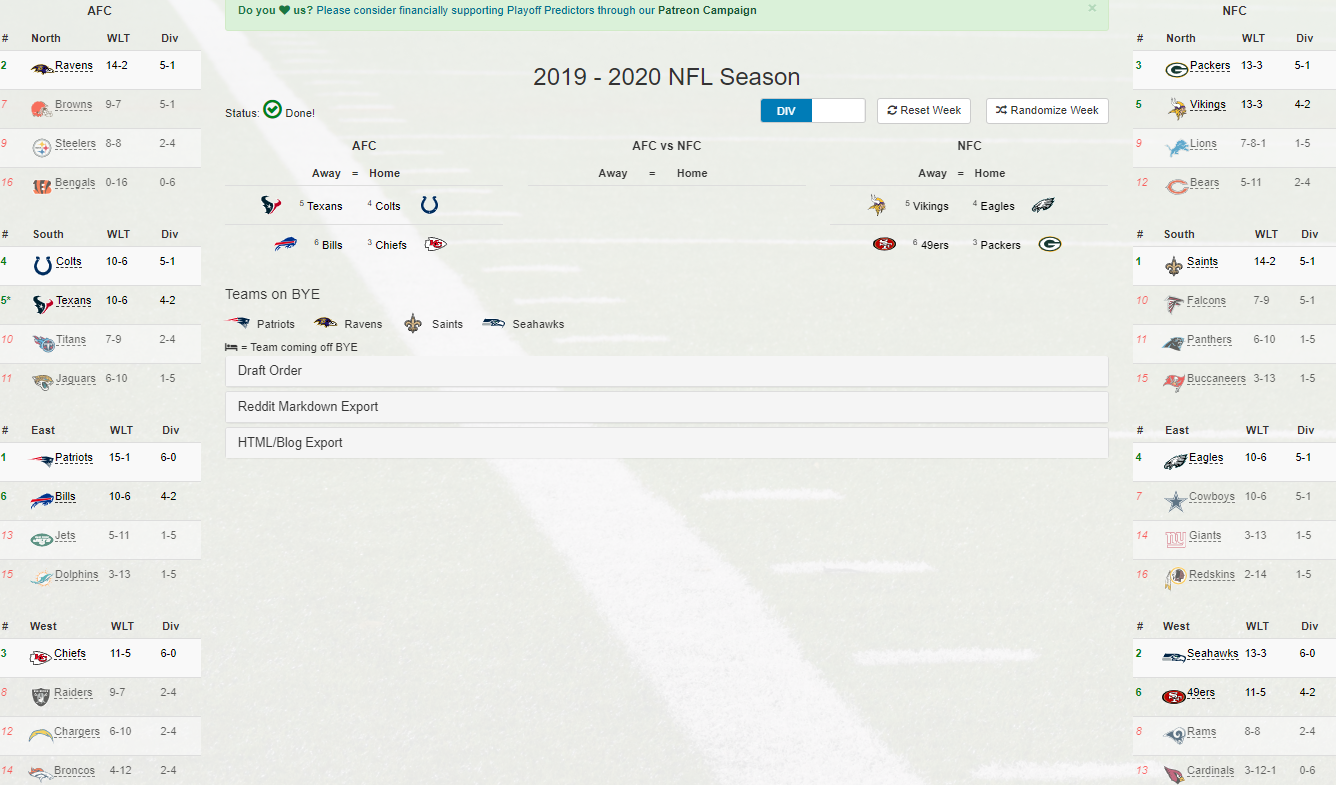