As the focus shifts to the AFC West rival Broncos, one of the key factors will be getting healthy and the Chiefs revealed some good news on that front on Wednesday. “Everyone’s going to practice today in some form or another,” Coach Reid told reporters to begin his opening remarks. “We’ll see how that goes.”

Chiefs Veteran Blasted for Bragging After Loss to Bengals | Heavy

Hurst got hurt early in that game and didn’t return, and the Chiefs lost the game 27-24. After the game, Reid apologized to Hurst via the media for the trash talk prior to the game. Yet, Reid opted to take to Twitter to check his receipts publicly two days later.

Kansas City Chiefs WR Mecole Hardman remains on injured reserve with an abdomen injury and won’t play in Week 14 against the Denver Broncos. Hardman is not eligible to be designated to return from injured reserve until the team’s Week 15 game against the Houston Texans when four games have elapsed. At that point, the team can open his 21-day practice window and at any point during that window they can activate him to the 53-man roster.

In Week 13 against the Cincinnati Bengals, Moore’s offensive snap share was again on the decline as JuJu Smith-Schuster’s snap total rose in his second week back from a concussion. Moore played just 23 offensive snaps, which was his lowest total since Week 10. The rookie wasn’t targeted once during the game. He did have one carry that went for 12 yards, but that was his lone touch of the day.

Toney was a limited participant in the day’s session. If he’s able to return this week, it would be a boost to a Kansas City offense that’s playing a Denver defense that’s No. 2 in points allowed and No. 3 in yards allowed.

(though I don’t disagree)

FWIW, it does look slightly less confusing once it’s expanded out and the <CR><LF>s are put back in…. But yeah, that’s one of those lists of things that a better person could have put in a chart that’s way easier to read.

You dirty anuses! Now you shall know what it is like facing “Mr. Unlimited” in that he will throw unlimited interceptions and incompletions. You will see Russ cook! in that he will be on the sidelines filming a tik tok on proper ways to heat up a hot dog. The only thing more insufferable than his play is his persona. We truly sold our souls to the devil in the Peyton Manning era to end up here. LOL

always good to seeya, Mancar … and (more or less almost kinda) feel badly about your team this season: Wilson was supposed to be The Savior, or at least better than whoever he replaced, but most of the season he’s looked like Venus de Milo and you (fans) deserve better than that (not wins, mind you, but just more competitive would be nice)

hell, who knows … the Broncos might actually win this week … stranger things have happened … and drop in more often, Brother!

LOL don’t lie to me. You are enjoying every moment of this continued collapse and that is ok. Every fan base believes they deserve better but the nice thing is that…well there is no nice thing really. We are stuck with this guy for at least 3 more years.

Its crazy how one player can completely change the fortunes and outlook of your franchise. Oh well 🙁

Can’t believe I’m sharing this with you but we already figured out the next moves you should make:

I have been trying to embrace the tank for 6 years but for some reason they thought they could compete with Joe Flacco and Brock Osweiler and Teddy Bridgwater. We should have been tanking after Peyton retired. But nope, the Front office made stupid decision after stupid decision and tried to avoid the tank. You get lucky sometimes like you guys did and went from respectable with Alex Smith to Perennial Contender with Mahomes but usually you have to take 3 steps back before you can move forward. Look at Miami, Cincy, Buffalo, Giants, Jets- all on the up and up because they took time to build the right way not the easy way.

Respectable with Alex Smith AND Andy Reid to Perrienial Super Bowl Contenders with Pat AND Andy Reid. Your coaching situation has been pretty dismal since Shanahan. Peyton hid your warts.

Wilson, the gift that keeps on giving. For the next 4 years 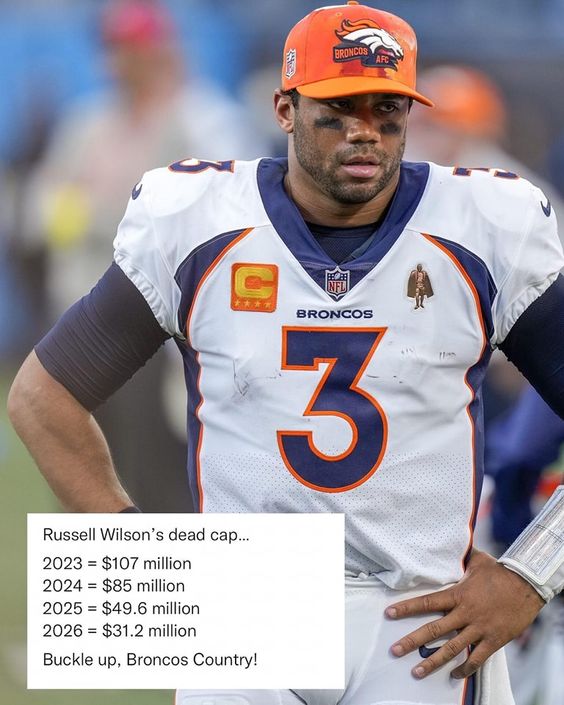 I thought I was misunderstanding those numbers when I first looked them up. Just incredible.

Will he play up to the contract this coming Sunday?

Did his mother negotiate for the Broncos with this contract?

I wasn’t born yet, but somehow it is still one of the saddest days of my life.

It snowed that day here. I worked 2nd shift and remember cleaning the snow off of my car after my shift as I was heading home I heard about it on the radio. I was thinking “why him?”

That was pretty much my thought as well. Just dumbfounded by the news. “Why would you shoot John Lennon?”

Tragic – one of the days that are etched in my memory.

Mark David Chapman had John Lennon sign something (I believe the cover of “Double Fantasy,” he and Yoko’s most recent album) hours before he would shoot Lennon. The proper way to hold the cup is with two hands. She deserves to be disciplined for this faux pas.

i think I could deliver a proper spanking

Alright.
The spanking/discipline joke was damn funny. Once.
Time to move the humor train along

Do you think she wants a train ran on her?

Good work guys. Maybe we can get Hoosier to stop by and explain again why we can’t keep members around here.

You asked for a different joke, so I delivered one.

The reason we lose members is because people take things too seriously.

All situations that have led to someone leaving this place for good started with someone up in arms over something that could have easily been scrolled past.

How true that is

Says the guy who could have scrolled past.
Last night, Zulu was called out for running people off with politics.
This kind of 5th grade humor is far worse.
I can’t think of one thriving forum I belong to that would allow this stuff.
But, hey, we don’t need to thrive as long as you get to think you are funny

Ok, I will use my rod of discipline then.