Today in Chiefs history, Tracy Simien was born in 1967. Barry Word signed with the Chiefs in 1990.

And without further ado….

Let’s do the news!

Comparing incoming NFL draft prospects to those who’ve come before is a time-tested tradition. Sometimes it’s an exercise in futility, but it never gets any less enjoyable to make the comparisons.

Chiefs’ all-time record against each opponent in 2022 | Chiefswire

Note: This one is a few days old, but I never saw it and thought it was interesting. So not “breaking news”, but hey. Those damn Colts…

During the illustrious history of the franchise, the Chiefs have won 359 games, lost 306 and tied five against their opponents next season. They have winning records against each of the three teams in their division and the one team that used to be in their division prior to the 2002 realignment.

Travis Kelce Says He Had to Quiet Down Patrick Mahomes During Playoff Game vs. Bills | SI.com

The Chiefs had one of the most iconic finishes in NFL playoff history this past January when they beat the Bills in overtime via a walk-off touchdown. But before that, Chiefs tight end Travis Kelce caught a huge 25-yard pass with less than ten seconds to go in regulation to set up the game-tying field goal. On Thursday, Kelce shared that quarterback Patrick Mahomes almost blew it.

After trading away Tyreek Hill to the Miami Dolphins, Kansas City re-stocked the receiver room by signing JuJu Smith-Schuster and Marquez Valdes-Scantling. But the Chiefs still needed to add a young playmaker on a rookie deal to ensure the offense had a long-term plan at wideout that wasn’t going to break the bank.

The NFL is in good hands. Well, good arms, to be exact. There are a plethora of young, talented quarterbacks across the league in today’s NFL. Just last year, seven starting quarterbacks under 30 made the Pro Bowl.

Gone are the days of paying for past contract sins for the Kansas City Chiefs.

Right now, the Chiefs rank near the top of the NFL in effective salary cap space, with $14,755,982 available per Over The Cap. One of the reasons that their cap space is in such a good spot is because they’re not paying out a ton of dead money to players who are no longer on the team. For instance, Kansas City stopped paying for the contract handed out to Eric Berry just last season.

“Tight ends stick together,” said Kelce, via press release. “It’s awesome to bring the current generation of tight ends together with legends from the past generation to be able to pick their brains. There are always ways to improve as a player and this is a unique opportunity to be in the same room with the most talented individuals to ever play the position and learn from them.”

Discussed yesterday, but if you missed it – there’s now money to be made in College. Tip o’ the Newscap to Berserker

Pitt WR Jordan Addison reportedly transferring to USC on NIL mega-deal, will make more than JuJu Smith-Schuster with the Chiefs in 2022 | GolfDigest

$3.5 million, the reported value of Addison’s 2022 NIL deal with the Trojans.

Kansas City Chiefs CB L’Jarius Sneed’s car was shot up while he was visiting his hometown of Minden, Louisiana.

TMZ Sports reports that Sneed’s Ford Bronco was vandalized in a hail of gunfire that occurred Friday afternoon in Minden. According to TMZ’s report, the belief is that the shooting was random. No one was in the car at the time of the shooting and no one was hurt in the incident. They also say that Sneed said two of his friends had recently been driving his car.

A look back at the big week for the World Cup coming to Kansas City + #SportingKC and Current in action
Part 1 of my Sunday series on the impact HBCU players had on the #Chiefs ..here's a sneak peak.

Do you agree with @BuckyBrooks' Top 15 players from the loaded 2019 draft?

During the week of @te_university, @gregolsen88 highlighted a tight end whose skill set jumped out at him last year as well as what it’s like to lose his job to Tom Brady.

at the PGA, English golfer Richard Bland had an issue on one of the greens: a squirrel, to be precise … play it where it ends up, just OFF the green … and so it goes

You know it’s not going to be your week when you play a good recovery shot from under the trees & this little fella gets in the way 🐿😄 To top it off. The ball rolls back off the green & don’t get up & down 🤷🏻‍♂️😄 #sumstheweekup pic.twitter.com/fL5BASuJI9

Last edited 29 days ago by upamtn
1

I went to bed it was May. Woke up to March? God is telling me I need to get my indoor projects done?

VOTW. Yesterday I found out I get to shoot 2 fireworks shows again this year. The private show is off this year due to graduations, vacations, etc but I picked up a Country Club shoot. Being how the 4th is on Monday and my other shoot is on Sunday the 3rd, I let it be known I’m free Saturday to shot too! Wink wink!!

You’re going to be spoiling your thunder a day early. 😀

Interesting> went to bed in May, woke up in late August. If you’re missing your heat, happy to send it back.

I checked the link to the golf digest story about WR Jordan Addison transferring from Pitt to USC. Could somebody please give a thumbnail sketch of the NIL (or post a link to an article on it). I know the landscape has changed re student athletes and sponsorships, but how big a shake-up is this? Oh yeah: that article included a link to a story about John Daly and Little John (a Razorback golfer) being formally sponsored by Hooters – which brings us back to ChiefDog’s blast of caffeine below.

It is a long weekend up here (Victoria Day, named after some long-ago monarch, more commonly known as the May Two-Four weekend). I believe it is the Memorial Day weekend down there, or maybe next weekend? Regardless, here’s my respects for those who served and died.

Last edited 30 days ago by larch
3

Victory of the Week: yes, I like this topic, glad Tony revived it last night, does a person good to reflect on successes. Mine is getting the vegetable garden planted over the past week, including having plastic sheets ready to protect the tomato, pepper and cuke transplants from a frost (which did occur two days after getting those transplants in the ground). 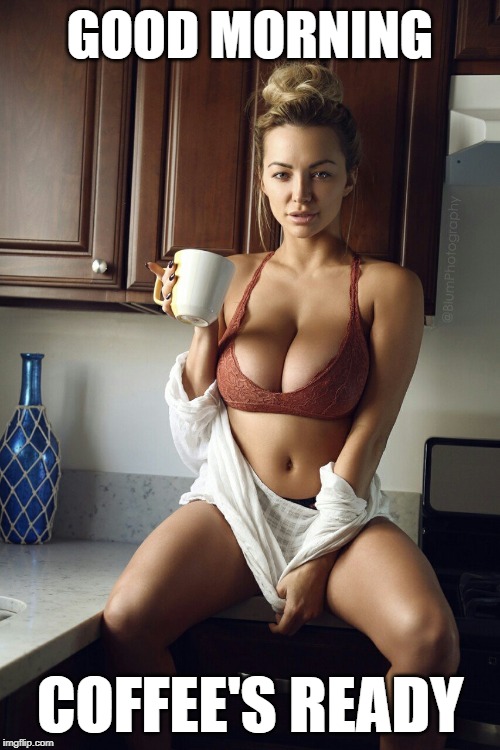 heart problems so i have to limit what can kill me, so between these two things, (literally and figuratively) i can do without the caffeine 😉

She could kill you

I’ll limit my risk to once a week

That gets the blood circulating!