This tier is a lot lonelier this week. The other teams have simply struggled to much against inferior competition for them to remain here.  Of the 3 that remain, I think you can make an argument for putting them in any order. I’ll keep them the way they were until one of them does something to separate themselves from the pack.

While these teams keep the same ranking, I’m dropping them down a tier. The Titans may need to be dropped lower due to injury, but I’ll wait to see how long-term those injury problems are first.

The Bills didn’t do anything this week to deserve the drop. I just changed my mind about how to interpret their previous results. Apologies to the Bills fans who frequent AG.

I think I might be overrating the Ravens a bit here. Despite currently being at the top of the AFC, they’ve relied heavily on close fluke wins to get there. That typically doesn’t sustain throughout the season, and I wouldn’t be surprised if they suffer a number of shocking upsets to close out the year.

A bit of the promotion for the Colts despite the loss. This was a game they deserved to win, but fluke turnovers gave Tampa Bay the narrow victory. That, in combination with other nice wins, propels them up a tier.

It seems like a lifetime ago that the Panthers were 3-0. But since that hot start they’ve been 2-7 and are barely hanging on to their playoff hopes. I bet they wish they still had that 2nd round pick they gave up for Darnold.

Got rid of the fifth tier since at this point those bottom teams have won enough to show that there’s not a huge gap between them and everyone else.

Except the Lions of course, but they’re the opposite of the Ravens. While they have yet to record a victory, they’ve had numerous close losses they should have won (including, ironically, against the Ravens).

“Of the 3 that remain, I think you can make an argument for putting them in any order. I’ll keep them the way they were until one of them does something to separate themselves from the pack.”

Hmm… Trying to figure out how the Pack can separate themselves from the Pack.

Browns are too high, Broncos too low and Pats way too low (that team is for realz) … the Chiefs are too high, at least until they show that they have BOTH Offense and Defense working at the same time … something they really haven’t done yet (outside of the Raiders game)

Agreed on all counts.

they’re also way ahead of the Chiefs in terms of conference standings … ie, inside track to bye week and home field, etc

unspectacular means nothing, winning games is where it’s at

They aren’t spectacular looking, but they are solid, from what I’ve seen.

Browns need to be moved down a tier or 3. Theyre 6-6 and will finish the season 6-11. Cowboys, down a few notches. Theyre getting exposed for the very mediocre team they are. Seattle should be moved down to the terrible teams. Yes they were a 2 pt conversion away from tying that game but that was solely due to Foosball Teams kicker hurting himself pretending he was an athlete. Speaking of Foosball Team, they should be moved up to the bottom of the playoff contenders. 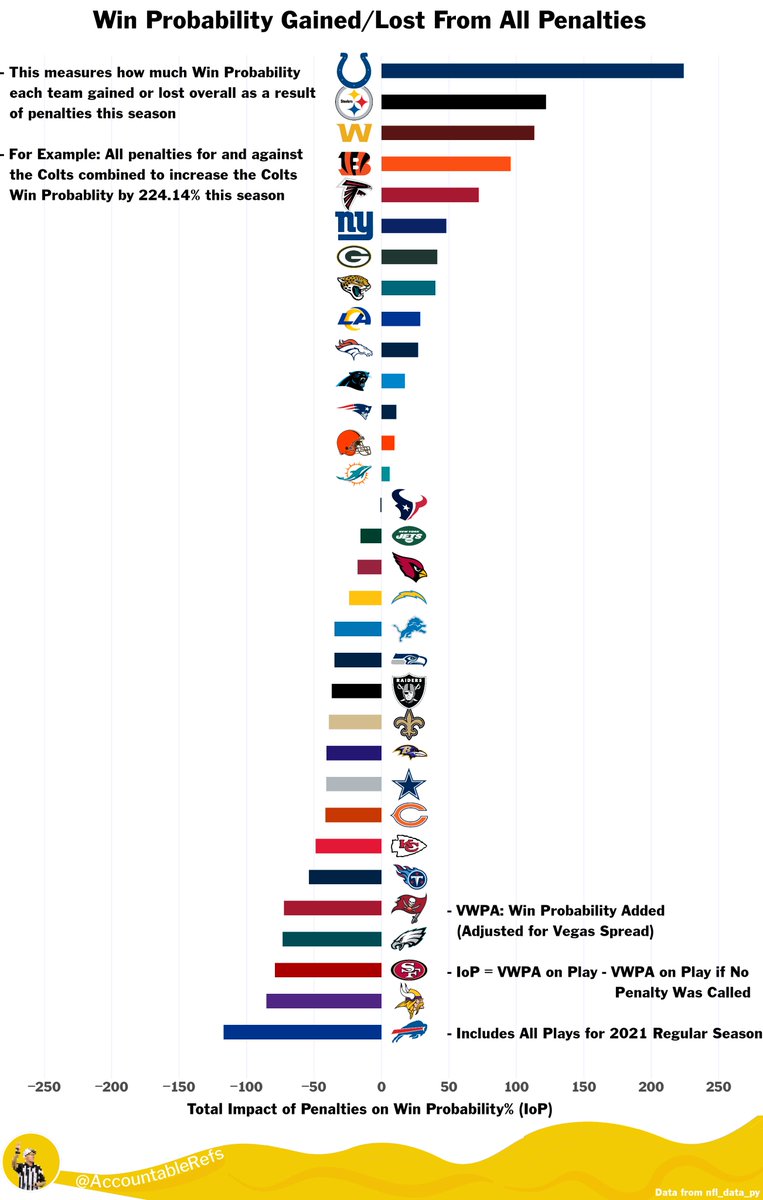 The #NFL teams hurt/helped most by penalties this season

We think taking this unique approach to measuring the impact of penalties brings something new and interesting to #NFLStats. We hope you do too!