At this point it seems like everyone has forgotten all about the Chiefs forgettable performance against the Oakland Raiders defensively. Which is good, because that means you guys are learning that this defense is pretty darn good at what they do. One game does not define a season, and that has to be remembered every single week. So the Chiefs performance against the Denver Broncos will not define their season, even though it was probably one of the most complete victories I’ve ever seen during the Mahomes, or even Andy Reid era.

Evidently the entire Chiefs’ roster are snow game guys, because they have absolutely dismantled the Denver Broncos is the snow in back-to-back seasons. Facing Drew Lock and his tendency to miss easy throws and just the overall unfamiliarity with NFL defenses does the Chiefs somewhat of a favor. Not that they needed that extra benefit regardless.

If you were unaware I did not do a review against the Buffalo Bills last week so that means the EPA numbers were not updated. Let’s take a look. 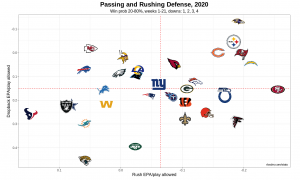 In Neutral game situations the Chiefs are up to ninth in overall defensive EPA/play. It’s a good feeling to know that the Chiefs have gone from a slow start to the season defensively to now being in the top-10 when the game is relatively in the balance. It goes back to what I’ve said all season long; they’re very good situationally and they don’t make a lot of mistakes is specific situations which is a sign of a well coached unit.

Can't wait for Willie Gay to continuously get more snaps. Takes a step with flow against PA. Quickly backtracks and finds whoever is tracking in behind him and makes a fantastic play to break up the pass pic.twitter.com/zS0GzrIwpV

Willie Gay is going to continue to get more and more snaps for this defense and soon enough he should take over for Ben Niemann by the end of the season when the Chiefs go with one true linebacker on the field. I say true linebacker because the Chiefs do a lot of personnel things where Daniel Sorenson ends up being the de facto linebacker when they go with three and four safety looks. Gay is without question the most athletic linebacker on the roster, and has continued to show week-in and week-out, when he’s on the field, why the Chiefs spent a second round pick on a guy that played a grand total of 28 college games. Here he shows great play recognition and his athleticism to make this play.

He ends up flowing with the play action, but as soon as he sees the quarterback he turns the hips and begins his drop to his zone. The one thing you love to see when linebackers have to turn around to get to their zone is when they’re actually turning to find out who is coming in behind them instead of just getting to a spot. When you’re trying to get to your spot you have to know where in your zone you need to be to actually make a play. Dropping just to drop doesn’t do yourself any favors, because the offense already knows where they want to attack. If you drop with a purpose you can make plays like this. If Gay drops to his mid curl zone like he’s supposed to, then Lock can get this ball over his head. Instead, he turns and sees the over route coming in behind him, so he gets more depth and makes the play.

The Chiefs bring more guys than the Broncos can block and get a free rusher which forces a throw off of Lock's back foot which is a recipe for disaster and it ends in a pick six pic.twitter.com/uFCN2r8ea6

Here’s the pick-six from Daniel Sorensen. Spagnuolo draws up an excellent blitz design that ends up with one more guy than the Broncos can block, so Lock has to get rid of this ball earlier than he wants to. He knows who his hot is and technically makes a decent decision with where to go with the ball. The problem is if you know you’re going to throw the out route there’re two things you can’t do. You can’t be late and you can’t throw it off your back foot. Lock does both on this throw and ends up throwing an interception.

Sorensen already has the advantage because the Chiefs are blitzing and it’s man coverage across the board. He knows this ball has to come out quick so any vertical route is essentially eliminated from the route tree from the snap. Once he sees the out route he jumps it quick and makes a play on the ball. Good all around execution from everyone on this play.

This is all around good coverage by everyone. Broncos go with level concept on the rollout. Tight split forces secondary to give space, Ward plays perfect outside technique and Mathieu gives ground to not get beat deep then drives on the ball pic.twitter.com/eTEMfEvn3g

Looking back on this play it seems like the slot receiver ended up getting way too much depth on his route. The play call wasn’t a bad one, and it’s a concept that can beat cover two, which is what the Chiefs are in. The motion forces Ward to back off his receiver, but he still keeps outside leverage, keeping in mind the fact that he has to carry vertical routes as far as he can.

Mathieu gets good depth on his drop so everything stays in front of him. It’s only a two man route so Lock has to throw it somewhere and if you watch, the corner route from the slot receiver is actually open, but he gets way too deep down the field, which allows Mathieu to close the space between them easier and enabling him to make a play on this ball. There’s a lot of little things that go into the execution of a play and sometimes defenses are bailed out by failed execution by the opposing offense, Which not to say the Chiefs were completely bailed out on this play, because Mathieu makes a good play on this ball, but the Chiefs were benefactors of failed execution here.

This is really a hell of a play by Ward and Breeland. Ward gets through a ton of traffic and Breeland is able to shed his block to make this tackle short of the sticks pic.twitter.com/wGEqhelHeT

This is probably the best play from the defense against on Sunday. The Chiefs are in man coverage, the receiver motions across the formation and Ward follows him. Obviously a dead giveaway to the offense that it’s man coverage. Chiefs end up in a two-man look which means it’s man coverage underneath and the safeties have half field coverage.

The Broncos drew up a good play to get a first down out of this. Ward has to get through the traffic of two receivers, having to go through one receiver is a tough task in its own right, but having to go through is a tall task, but he does a great job navigating his way to his man and Breeland does a fantastic job of getting off of his block and the two combine to stop the receiver short of a first down. This type of play usually ends in a first down, but the Ward and Breeland executed their assignments to perfection on this play. It’s plays like these that down the road in crucial games you have to make so it’s good to see them making these plays even when the game is essentially put away at this point. 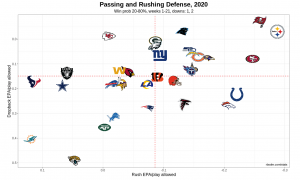 The Chiefs are still absolutely dreadful on early downs in terms of rush EPA/play allowed, but as we all know run defense isn’t the most concerning thing in the grand scheme of things. In reality, it’s beneficial to defenses when teams run on early downs, especially in second and long situations. You’re actually doing them a favor. The problem you run into when playing the Chiefs is that when you make the “correct” decision and throw on early downs you’re still playing into their hands because they’re fourth in the NFL in dropback EPA/play. The only teams ahead of them are the Steelers, Panthers and Buccaneers.

It seems one of the reason the Chiefs’ EPA doesn’t really rank that high is because most of their work is done in neutral game situations, and because they put a lot of teams away early in the second half they end up in a ton of non-neutral game scenarios and obviously you’re going to give up yards and/or points when the game isn’t in the balance anymore. The Chiefs are going to look to continue their upward trend against the lowly New York Jets at home on Sunday. Hopefully they don’t play down to their opponent and make this more of a game than they should.

4/6 games have been won by more 2 scores or more. The Raiders game is the only anomaly because the Raiders bucked their own trends. Otherwise the Chiefs have held their opponents to 20 points or less in 5 games this season.

Is the Chiefs Defense Broken? 29 replies