Spring cleaning is upon us. My household is abuzz with people darting here and there to throw stuff away, organize what’s left, take good smelling cleaning fluid to all the surfaces, etc. That’s why I’m hiding out here under the guise of “work.” So let’s do this …

Baltimore Ravens: Terrell Suggs claims the departure of Ozzie Newsome greatly influenced his decision to leave Baltimore, smartly evacuating the team before they are third in a division won by the Browns.

Cincinnati Bengals: The saddest thing about the Bengals is the fact that a safety that played for them two years ago being signed by the Cowboys is the biggest news out of that organization …

Cleveland Browns: Media in LeBron-Land ponder if Eric Berry is still an option for the Browns, but unless Dorsey brings in Clark Hunt to negotiate it seems highly unlikely.

Houston Texans: Down in the land of the second-best barbecue, the Texans have signed OL Matt Kalil, signifying they have indeed forgotten what happened with David Carr.

Indianapolis Colts: Chris Ballard has signed Devin Funchess and Justin Houston and still has $70M+ … and I will take this moment to skip making a joke, and instead compliment the team-building of a good General Manager.

Jacksonville Jaguars: The MMQB details “how Doug Marrone got Nick Foles,” but if you want a TL;DR version, he did it with money. Lots of money.

L.A. Chargers: Fun stat — the Chargers do not.

Miami Dolphins: When asked if the team is tanking this season, coach Brian Flores said “every team (is) rebuilding,” which means they are indeed tanking.

New England Patriots: The League’s best cheaters missed out on TE Jared Cook in free agency due to Cook believing he has a better shot at TE1 in New Orleans, which will make Gronk’s inevitable summertime retirement so much better. (EDIT: I wrote this the Saturday before his actual retirement and, yes, it feels as good as I predicted.)

New York Jets: Maccagnan now has his team tied up into $122M of guaranteed money this year, and at this point that may be more than the worth of the entire franchise …

Oakland Raiders: The homeless felons have signed Mike Glennon to back up Derek Carr — duties include ensuring his eyeliner doesn’t smear when he cries, and being the big spoon in their shared hotel room when traveling.

Pittsburgh Steelers: Three players have forced their way out of Pittsburgh this offseason; team builds bathroom stalls around every locker per Roethlisberger directive.

Tennessee Titans: After signing Ryan Tannehill, the Tennessee faithful are trying to be optimistic about Mariota’s eventual mid-season breakdown.

this is too good…

The homeless felons have signed Mike Glennon to back up Derek Carr — duties include ensuring his eyeliner doesn’t smear when he cries, and being the big spoon in their shared hotel room when traveling. 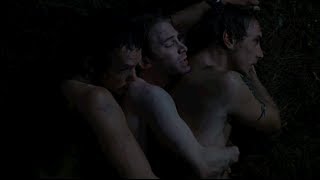 This was the winner

I thought the Steelers one was the best personally…brutal.

I liked this line because it achieved a quadruple putdown without the need of any punctuation whatsoever. I appreciate efficiency like that.

…before they are third in a division won by the Browns.

See, this is where we need a “rec post” button. Because I rarely have anything to add to these posts, but I thoroughly enjoy them.

Maybe I’ll make my own rec .jpg and just keep it on a bookmark.

That playoff streak wikipedia article is a fun one, but I also enjoy the playoff drought one (especially now that we’ve won a playoff game in recent memory).

Don’t like the Super Bowl one so much though ?

KC has won two playoff games in recent memory… unless you mean my short term memory, in which we’ve done jack shit…

Yeah, Dave really did a great job on it this week. Adding the images was a nice touch. Good work Dave.

Next week, the NFC! Who ya gonna pretend you faked into retirement now, Jordy Nelson?

Did anyone else realize the Raiders traded a 5th round pick for McCarron and then released him? Seems like a waste of a pick to me…

I didnt know they released him. Must not run fast enough …

Between giving away picks and money, Oakland and the Giants are fighting for the Ty-D Bowl. And that’s before discussing the starting QB.

Like how they paid Nelson his bonus and then released him…

Yeah and the Giants looking into trading for Rosen

My understanding is they had no choice on the Nelson bonus. It wasn’t an option.

Thank you Gronk for fulfilling my prophecy — as likely as it was anyway.