I don’t know about the presenters here, but it takes a FFL to own that historic weapon in its current state, and those are expensive. Wish I could take her out for that sort of spin, though. Looks like a blast and a half. But that’s just me, the stage is set, and it’s y’all’s to use. Whatcha got tonight?

I’m anti-rape.
Think I’d ask someone to “give it a go?”
Guns?
Well, I own eleven of those.

Stale content is an endless, thankless glamourless job that’s gotta be done. My name is BRaG, and I carry a mouse.

My name is Severely Concussed and I eat a mousse.

Curse you! Secure in the knowledge that I had learned how to make bon-bon and macarons that would fit in with mid-range shops in Paris, according to someone who’s been there repeatedly. And that’s me trimming back her effusive praise by a fair bit. I know my sister-in-law well enough to see where she’s past the point of honest praise and gone over the top. If I didn’t find the extent of the praise credible, I couldn’t in fairness post it that way.

Sorry. What, me ramble?

And an ohnosecond after I clicked Post… The curse is because you reminded me that mousse is on my to-do list. Might pair well with crepes, done right.

Tuesday Night O/T: It’s been 24 hours, how are you feeling about Mahomes’ new contract? 66 replies

Into The Afternight: Our 3rd Shift O/T 20 replies 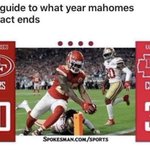