I have made this point time and time again throughout the season so what I’m about to say shouldn’t come as a surprise to anyone. The Chiefs are not very good defensively on early downs, they’re just good at situational football. Which, with regard to what down it is, they’re pretty good on late downs. The problem the defense is now encountering is that they’ve been awful on all downs and have been getting shredded more than usual on early downs, which puts them a disadvantage on late downs.

Prior to playing the Panthers back in week nine the Chiefs were actually good on third down. They were ninth in the NFL with a -0.10 defensive EPA/play allowed on third down, which is pretty good. Couple that with the fact they were allowing fewer third down conversions than expected and things were looking up for this defense.

It’s only been two games, but since the Panthers game the Chiefs have fallen to 14th in the league with a 0.05 defensive EPA/play allowed on third downs, and their third down conversion allowed over expected sits at 2.3 percent now. The Chiefs fared no better against the Raiders in any situation on Sunday.

Early down or late down it didn’t matter because the Raiders were getting anything and everything they wanted on a consistent basis all night. The only thing that saved the Chiefs on Sunday was the fact it turned into a “who’s going to have the ball last” type of game, and they’re going to win those games nine times out of ten. That’s fine and dandy, because the Chiefs offense doesn’t even play the same sport as the rest of the NFL, but you don’t want that one time to be in the playoffs when it’s win or go home.

Sorensen gets caught flat footed and once that happens vs Waller it's game over and there's no chance for Mathieu to cover that ground to help pic.twitter.com/NJBk6MAqOl

Darren Waller is one of the four best tight ends in the NFL, and should be treated as such. Placing Daniel Sorensen in man coverage against a tight end with wide receiver skill sets is not a recipe for success.

Waller is able to press Sorensen, and once he’s caught flat-footed Waller has already won the route and the only help available at that point is Mathieu hopefully getting all the way to the sideline to potentially break up the pass, but that’s too much field to ask him to cover in this scenario. Normally, that is Thornhill’s task but seeing as he only played 11 snaps on Sunday it was Mathieu filling in for him, and we’ll get into the Thornhill conversation later.

It's good that the Chiefs finally got a free run at Carr, but it makes little difference when you give so much ground to the quarterbacks release valve so you can't close the space between you before he can make a move pic.twitter.com/zX96zcbeHs

One thing that has plagued the Chiefs recently has been the fact that they’ve allowed check downs that should go for minimal gain go for big gains and first downs. This is a pretty good example of that problem.

Here the Raiders are running a two man route with Waller as the safety valve. Mathieu is in charge of covering the flat. He does have to maintain enough depth so that he can take away a route the comes to the sideline behind him, but given the route combination there’s no sideline threat. The only threat to him is Waller in the flat but as he retreats a couple steps he leaves too much space between him and Waller that he can’t close prior to the throw. Once Waller catches this ball there’s way too much room for him to try and make a move, and with no immediate help behind him it’s a one on one scenario and Mathieu can’t come up with the tackle, allowing Waller to gain more yards than he *should*.

I'd be willing to bet the Chiefs get beat on check downs worse than any other team in the NFL pic.twitter.com/k674vpWxky

This is another example of check downs terrorizing the Chiefs. Last season the Chiefs rushed six or more guys nine percent of the time, which was the seventh highest rate in the NFL, and they were exceedingly efficient at it. Of the teams that rushed six or more guys at that rate or more, the Chiefs were second in DVOA at -29.3 percent, the only team that was better was the Ravens. In layman’s terms the Chiefs were very good when they blitzed, and they blitzed a lot.

Part of being good at blitzing is taking away hot routes and safety valves, or at the bare minimum tackling those guys right away. The Chiefs aren’t blitzing here, but they completely abandon the fullback in the flat and that turns what was good coverage on the back end and a relentless effort by Frank Clark to get pressure on Carr into a 10-plus yard gain on a play that should have been snuffed out. Ward has his deep third, so he has to keep backtracking, but the linebacker on the short side is essentially covering air and that allows for the fullback to sneak out free after staying in to pass block.

One would venture to guess that some of these problems can be remedied by simply putting Thornhill back in his usual role. That frees up Mathieu to do what he does best, and that’s make plays. It also allows the Chiefs to deploy three safeties, which has been a very good package for them the past year and half now.

The Chiefs are now 14th in overall defensive EPA/play at 0.045 and 10th in dropback EPA/play at 0.053. It’s almost been a complete 180 in performance considering for the first eight weeks of the season they were top ten in both categories with negative EPA totals. 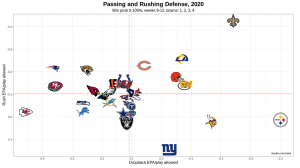 Since week nine (the Chiefs had a bye in week 10), the Chiefs have sported the worst defense in the NFL in terms of EPA on all downs. The most shocking part is the fact that they’ve been better in early down rush EPA than dropback EPA in that timeframe, but that just goes to show how important pass defense is in the NFL. You can be good enough against the run, but it really doesn’t matter if you can’t keep teams from throwing on you. I will spare you the graphic of how bad their late down EPA is since week nine because it’s ugly, to say the least. Causation does not directly equal correlation in this scenario, but they still go hand in hand.

The Chiefs haven’t been good enough on early downs against the pass specifically and it’s putting them at a disadvantage on late downs. They’re going to catch a minor break against the Buccaneers on Sunday, because the Bucs can’t push the ball down the field, but they’d better figure something out, because Tom Brady still has a little juice left in the tank.

I’d really like to know what’s going on with Thornhill. He allows so much flexibility on the back end when he’s out there.

The only thing I can think is he was being punished for something. Andy will never tell us though. But why would he have his lowest snap count coming off the bye?

Last edited 1 month ago by gonzangkc11
0

I kind of wonder if he just didn’t feel quite comfortable on it. I’ve gone thru enough injury rehabs to know that you can feel fine for a while before seeing some regression.

Thornhill bumped up to 70% of the snaps on Sunday

I think our problem defending the checkdown is from the disaster of Neiman being on the field. Gay might have some awareness problems, but he at least has the athletic ability to get to where he is supposed to be.

Neiman seems to make mental errors too, but even if he doesn’t he is always two steps away from making the play.

He is the new Jon McGraw.

By Anthony Stratton 12 hours ago

By Anthony Stratton 14 hours ago