Yesterday afternoon it was announced that Mahomes signed a massive contract extension with the Chiefs. The cap hits are as follows.

One interesting thing is that for all those large numbers, Mahomes won’t be the highest paid player in the NFL until 2023. Even in 2022 he’ll only be 7th behind such luminaries as Kirk Cousins and Jared Goff. With the increasing cap and new contracts constantly setting new records, it’s entirely possible that Mahomes won’t even be #1 in 2023 by the time we get 3 years of new quarterback contracts.

On the other end he will have a $60 million cap hit in 2027. That’s going to be a very interesting year.

Speaking of $60 million, that would be our dead cap hit now if we cut him before the season. So we’ll be stuck with him for at least one more year.

What are your thoughts on the new contract?

How am I feeling?

Surely no one is dumb enough to play single coverage on Tyreek with Mahomes throwing him the ball.

That’ll take you from six to midnight real quick

Here’s a preview of tonight’s Afternight special, moved up an hour tonight for your viewing convenience:

One thing worth noting about his contract is that he gets $500k to reside in KC over the offseasons. I doubt he’ll find it onerous to fufill that condition, he’s already basically in love with KC. 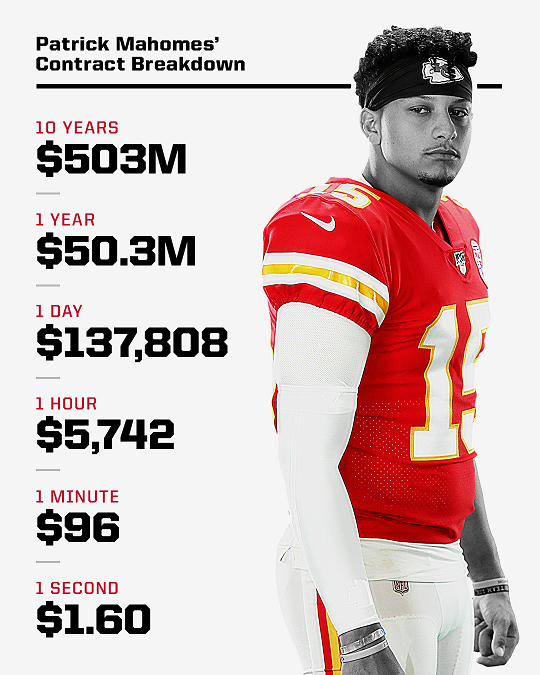 It’s not. His new contract is 10 years/$450 million with not-highly-likely (lets be realistic) incentives to bring the total up to $475 million. And if he is earning those incentives, awesome! Pay him all the money if we’re going to the Super Bowl.

I’m guesstimating that he gets 50% of his incentive money. Not so much a matter of lack of AFCCGs, I’m counting on those mostly filling the card. The problem is that people are already adjusting their expectations of him, so the MVPs could be really fickle.

He’d have to destroy all standards for MVPs/Super Bowl appearances to get even half of those incentive. No Chiefs fan will complain if that happens.

The worst case scenario with him earning incentives would be 10 straight MVPs and 0 AFCCG wins.

It will likely by restructured by the time he’s collected 50-60% on this deal.

When will you realize… Vienna waits for you?

You’re not alone, my friend.

Not to steal someone’s thunder but please for the love of the world wear your damn masks.

A couple 100 dumb ass people, met at the Capitol over the weekend, to protest mask wearing!! I hope everyone of them catch the covid and choke on there stupidity..?

I am more worried about those anti-vaxxer motherfuckers.

I never knew the great United States, has so many absolute idiots..but they sure have come out in droves

I work with a few and I feel like going ballistic on them because they are the fuckers that will prevent this from getting under control.

We are looking at shutting Austin down again for 35 days. Hospitals starting to fill up. Houston has really been hit hard..
We opened too soon. We are listed as an essential business , so we can still make a little money but not enough. I basically worked for free in April..
I’m all for doing what is needed, but this political bullshit needs to stop. Our fucking governor goes does a photo opp for trump on how Texans is going to open up early.. and look at us now!!
Sorry for the soap box?

I’m working on that right now…

I’ve been heavily pondering since about 2:00 ?
It’s hotter than hell down here, I’m already done with summer . Steve sent a picture of snow on his back deck this morning.. looked so inviting

i need a haircut….
fuck that shit

look at their leader

To be fair, every country has their idiots. We just don’t talk about everyone else’s because we don’t give two shits about anyone else. Hell 90% of the time we can’t be bothered to give a shit about ourselves.

I love that the anti vaxxers are also some of the loudest people screaming at people to wear a mask on social media.

When they come out with a vaccine for COVID, how will the anti-vaxxers react?

Depends who’s president. The most committed will oppose it no matter what, but for a lot of them it’s just one part of the right-wing conspiracy network, so they’ll be pro vaccine if Trump’s president and anti-vaccine if Biden is president.

They have yet to produce a successful vaccine for any virus strain remotely related to COVID, historically. I wouldn’t hold your breath.

Ya, but a man can dream

Its not my money so Im ecstatic that the best QB in franchise history is locked up for 12 years and was even reportedly in the negotiation making sure he got his but also that his teammates will still get theirs.

The NFL has a hard salary cap, so we do have to care.

a hard salary cap that as you know continues to rise and the people making the money decisions are far smarter than me so I trust them to know how to make it work, so no I dont care

The salary cap only matters if you give the wrong people massive contracts. Once Berry and Watkins are off the books we will be good for a while.

and I like the idea of going out a winner

can you imagine growing old/dying while cheering for a bad team.

now that would be hell

This might be the first contract in the history of sports outside of Mike Trout’s where everyone agrees that it was a good contract. Shit people are even saying that Mahomes was underpaid.

Wonder how much he is making on endorsements? It’s got to be a little hunk of change..

hasnt it been reported hes already made something like $200 million off of endorsement deals. I feel like Ive read that somewhere

Or alternatively his thought process was something like
$0.5B – check
Enough cap left to employ line to keep me vertical and receivers to catch – check
Good enough surrounding team to earn a lot of those incentives – check
Remember what the old man said about memories and winning – check

I guess it depends on whether his ego gets a bigger boost from a $ amount or winning SBs. Given the numbers I’d tentatively posit the latter.

Pay the man!! We’ve got some Super Bowls to win… I’m thinking the next ten will work..

The talking heads appear to be thanking their lucky stars that they finally have some prime content to ride for a while.

One thing I’d like to see them take a look at is the question of if Mahomes’ contract has set a ceiling for other QBs, instead of inflating the market. Will teams say to them that to get Mahomes-level money they have to produce like him, as well, at least for a few years?

I think that’s a distinct possibility.

Bradshaw loves him, who gives a shit what cow-turd says

Cowered, like most of his ilk comes with two different gears. It’s one thing when he’s popously pontificating from his pulpit, but when interviewing someone he’s far more pleasant to watch. Even Brainless’ interview of Reid was a good watch.

Bradshaw couldn’t give Pat any credit and said he was a one year wonder, while he was broadcasting the Super Bowl
Bradshaw can suck my balls

They’re upbeat about him in this, otherwise I’d have prefaced it differently. And Bradshaw’s a good storyteller, even at his own expense.

Into The Afternight: Our 3rd Shift O/T 16 replies