About a month ago, our friends at Chiefswire had a picture gallery of the worst Chiefs free agency signings over the years. As I read about many of them, I began to realize that I hadn’t heard of what happened to many of these players after leaving the Chiefs. Did they stay in the NFL? Did they move onto other careers entirely? If you too have had any of these questions, I hope to help answer them for you. So let us begin with perhaps the most hated free agent…until last February, at least:

Lin played football and soccer in high school in Waco, TX. He would be a walk-on at Pat Mahomes’s future home, Texas Tech University, and make less than 50% of his field goals in his sophomore year. He improved throughout his college career after being named the starting placekicker and would set school records for extra points made; he holds the school record at 100 of 101. In 1991, he tied a school record with 17 made FGs, a record that stood until 2013. He would leave TTU as the school’s all time leading scorer at the time, with 220 points.

After going undrafted in the 1992 Draft, he was signed by the Dallas Cowboys to create competition at the position. He would win that battle and would soon become instrumental in the Boys’ run to and winning of Super Bowl XXVII. He set a franchise rookie record with 119 points and led all NFL rookies that year in that respect. The following season, he would be released after missing 2 field goals in a loss to the Buffalo Bills, which contributed to an 0-2 start for the Cowboys. Was this, perhaps, foreshadowing?

He would sign as a FA with Kansas City the following season, replacing future Ring of Honor inductee Nick Lowery. He would have a solid 1994 campaign, going 25 of 30. Then there was his 1995 season and…well we all know what happened in that infamous playoff game vs. Indianapolis. He missed three FGs in a game that was just dismal all around, losing 10-7 after finishing the regular season at 13-3. This was particularly shocking after his regular season, after he went 24 of 30. However, his final kick vs. Indianapolis was his ninth missed kick in five games.

After the playoff game, he drew the ire of not only the brokenhearted Chiefs fans, but the franchise as well. He would be informed the following morning by Coach Schottenheimer that his contract would not be renewed. Despite having 81% accuracy in his two seasons, his atrocious display in the playoff game showed that he could not be relied on in those situations. He was released the following February. He signed with the Minnesota Vikings in August of that year, 1996, but only lasted 20 days before being released again. After that, Lin decided to call it a career.

Since ending his NFL career, Lin got married, moved back to his home in Waco, had 3 children, and became an investment manager with Farm Bureau. Despite his life going in a much better direction than his football career, he is still haunted by the playoff loss. But with the Chiefs finally winning their first Super Bowl in 50 years last February, do you think we should finally forgive Lin Elliott for his transgressions? What say you, fellow Chiefs fans? 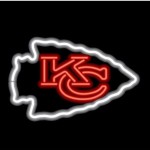 I didn’t realize he was a FA signing. I’d say that’d qualify as one of the worst.