Today’s course requires a bit of table-setting, so please bear with me.  The medley itself is ST, accompanied by random chance, luck, and superstitions.  Our Dude wrote of game day traditions.  Mine, once I’d received my game day jersey, was that and my hat while at the games, but at home, I’m clumsy.  I’m clumsy, so I only gear up when I feel we need some mojo, y’know?  Like the rally cap thing.

So, having written on the O and the D, I wanted to complete the loop, but Special teams are, well, special.  The TV crew covers most ST plays almost as an afterthought, and 3, maybe 4 ST players are the most you are really aware of during the game, the kickers, a returner, maybe another guy.  What to write about?  Then Sunday happened, and I knew.  Butker missed – twice.

Football is still a brutally unforgiving game, despite the injury situation’s ongoing improvement, but not just physically.  At the NFL level, small things can balloon, today’s G.O.A.T. can be tomorrow’s goat, and even with perfect recovery an injury can sidetrack or derail a career.  Nowhere is this more obvious than on the ST unit.  The majority of the time that the ST unit’s on the field, half the people are only paying half-attention to it, and the other half aren’t watching at all.  The rest of the time, every eye is focused on the screen.   And for every shining moment in the spotlight, there are likely to be more moments in the doghouse.

Which brings us back to Buttkicker.com, he of the two missed kicks.  Think about those kicks, for a moment.  Neither was notably long, not really.  He missed both in the same direction, but they were well separated by time.  The only other thing they have in common must be Butker, right?  It wasn’t a windy day, or any weird weather, or icing the kicker.  Obviously, the only thing they have in common is Butker.

You see, I watched the first miss, and something caught my eye.  The orange ribbon on the right-side upright (TV view) had been blowing left, which was why I thought he’d missed – but as the camera panned across, the opposite pole’s ribbon was dangling limply.  Since there was no follow-on remark about wind, I presumed that it’d been nothing of note – but I didn’t forget it, either.

Remember my “jersey mojo” thing?  Late in the 4th, 4th-and-nine, and things are looking grim.  Mrs. BRAG looks over at me and says “Don’t you think it’s time to gear up?”, and gear up I faithfully did – sitting down just in time to see that jaw-dropping play in its entirety.  Team Mojo FTW! right?  Stayed geared, Butker missed again, and we are still savoring the sweetness of the end, tonight.  But that’s just a nice story about a sweet coincidence.  Sports superstitions aren’t magic, they don’t bend the fabric of time and space.  But many of us have them.  Why?  Well, they’re fun, of course, and often traditional – but so are fireworks, and few people, even those who like fireworks, get too bent out of shape if they miss out a year.  Sports superstitions are taken a mite more seriously.

Remember Butker’s kicks?  Well-separated by time and situation?  When I was talking this over with Tony, he told me it was funny, a neutral fan who was attending with a relative mentioned to him that he’d felt a gust of wind, right after the snap on the second Butker miss.  The second one.  Remember what I saw with the ribbon?  That was the first one.  Those two kicks have evidence to support the probability that two separate, stray, random gusts of air blew two well-spaced kicks in the same direction and by about the same amount.  Life’s tough on Special Teams.

I don’t know about anyone else, but I’m keeping my gear on standby, just in case.

I think Butker just got cold. He’s used to kicking about twice as much during a game….

Butker is on thin ice. He’s one miss away from a visit to Tony’s dungeon.

I thought watching the game live that the wind blew the first kick out. The snap was bad on the second kick that was missed.

The second missed kicked at the end of regulation was a bad snap and ball placement.

I saw that, too, and it no doubt played a role in the miss, but do you /really/ want me to try and cover every last little detail of something? I’d still be writing about the first miss, if I tried to do that, lol.

But more seriously, what you mentioned is still a part of what my theme was, that especially on the STs, there can be small things that affect plays in a big way. The snap is one of them, the gameday conditions are another, and the list goes on and on. You and I aren’t the only ones who noticed that snap, eitherr.

I’m still keepi9ng my gear ready. The team might need some mojo again. 😉

Nope. The article is a conversation starter. We aren’t Another Place, we endorse participation

(And, yes, there IS a mouse in my pocket)

Well said. I hadn’t really considered what my “goal” should be with this column, but I think you nailed it: Start conversations.

At least, thinking back on the other two, they fit that groove pretty well. Gonna spend some time rolling it around in my head, see if anything sticks to it, but I’m pretty sure it’s the right vibe for me to play to.

Thanks, SunDevil. I needed that.

Mahomes is Odysseus and the Football Gods are mad for mocking them this season and so the ship crew (Watkins, Morse, Ervin, Hill, BUTKER, etc.) suffers. But eventually the Gods returned (Berry) and found favor in Odysseus and brought him home to reign once more!

Who was Mahomes looking at when he threw the pass to D-Rob?

Nobody only because he was staring into the eyes of Destiny, which has no physical form.

I must be downright curmudgeonly today. After selecting a Qb coach as the person to become the passing-dominant OC to run his offense, Zimmer demanded a running offense -halfway through the season- trying to hammer a square peg into a round hole. So he fires the OC after a game where they couldn’t run and replaces him with a QB coach. Brilliant.

And the quote from the offseason about expecting loyalty to trump free agency from assistant coaches? Set my teeth on edge.

Bill Belichick is on a conference call with Pittsburgh media currently.
He sounds as enthralled and thrilled as always.

He mentions that the Steelers are "playing extremely well."
He also mentions, as one part of his proof, the Steelers' kicking game

Two weeks in a row…..
I see the article headline, I want brisket.
Im 100% making Brisket this weekend.
Pics to follow

If my niece wasn’t getting married this sat I’d come down and shoot an episode for the Arrowheadguys YouTube channel.

How rude of her!

We’ll get more dicks…uh…clicks that way. 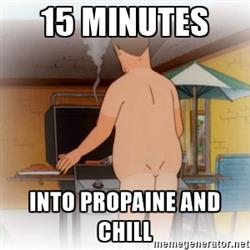 Yeah but some fans say he missed kicks this season so he’s anti-clutch.

I keep forgetting that a lot of the things I don’t think are terribly difficult can look much more intimidating when described. In this case, saying it’s a pate-a-choux crust, the same batter-dough you make cram puff and eclairs with, probably doesn’t help much. Nior does it help that I forgot the baking time and have lost the recipe. But yeah, basically, it’s a gigantic open-faced cream puff. Mrs. BRAG approved.

But I tell you what, as compensation for my lack on this one, I have another dessert that’s also quite popular, and is dead simple to prepare. Stay tuned for my next Redneck Kitchen piece, and I’ll put it there. For everyone, but since you “asked”, it’s especially for you. 😉

Looking forward to it

One thing A coworker noticed is he thinks Butker favors the left hash and on the misses he was on the right hash.

He was so money at training camp. He would set up on the left, the right, the middle, the sidelines, on top of the scissor lifts… didn’t matter! Through the up rights.

He had bis moment now. He will not want another this season.

What controls which hash mark is used for a field goal?

Thanks – I now feel I can BS with more confidence 🙂

Hmm good to I know there might have been some windage. I was legit thinking he misses in OT and it’s time to cut him.

The one in OT wasn’t a cake walk it started to fade left.

Let’s hope he gets favorable winds from here on out. We need special teams to be special.

My boss was in that EZ and said there was no wind, buy the second he heard the thump of the kick he could feel a gust kick up.

I couldn’t tell b/c i was blocked from the wind.

Even the wind is bringing down the ban hammer now? Unreal!

Nice write up BleedingRng. I heard commentator remarked @ the football lace facing opposite. I dunno, may be I didn’t hear it right, I was in agony . Anywho, I do buy the Hand oh God reaching from Heaven’ as a reason! Again very good write up. Thanks for it.

Love the writeup- but you missed the real culprit. Winchester is so inaccurate that there is no comfort zone for the holder and kicker. Watch every long snap this season. I don’t see him back next year.

The one snap was low and in, but DC2 got it down. I don’t blame the snap.

I’m talking confidence. Seriously 2 out of 3 long snaps – punts and FG’s – are way off line. That kills trust even when a snap happens to be good. Kickers are creatures of habit. It’s about practice and consistency.

It creates hesitation, and in return, f’ups. I figured there would be more competition this year. Willing to bet there is next camp.

If this was a South American soccer team it would be explained by the hand of God reaching down from the heavens and knocking them away.

The hand of God knocked it in for Maradona. Are you talking retribution or karma?