With the AFL/NFL merger in 1970 it was agreed that the league would expand to 28 teams.  The expansion was finally announced in 1973, with Tampa Bay getting a franchise for $16 million, which was considered cheap even back then.  The delay in expanding was due to the league’s increased minimum seating capacity requirements.  Until the Bills and Patriots got a larger venue they couldn’t add anyone.

The Tampa Bay franchise was awarded to Tom McCloskey, but he backed out within a month because he didn’t like the financial arrangement with the NFL.  Hugh Culverhouse then got the team.  The standard name-your-team contest was held, and the Buccaneers were selected.  The team began play in 1976 in the AFC West division and moved to the NFC Central the following year.

USC coach John McKay was the sacrificial first coach, unable to turn down the $3 million per year offer.  The expansion draft wasn’t as generous as it would be later, so they started with mostly over the hill players and cast-offs from other teams.  It showed their first year, going 0-14 and following it up with a 2-12 season.  In a post-game press conference McKay was asked about the execution of his offensive line.  He replied, “I’m all for it”.  He also said, “We can’t win at home, we can’t win on the road, so we are going to petition the league for a neutral site”.

In 1978 rookie quarterback Doug Williams began playing.  They went 5-11, but had lost Williams to injury a good part of the year when his mouth had to be wired shut.  In 1979 they would go 10-6, and make it to the Conference Championship before losing.  An injury plagued 1980 would have them go 5-10-1.

At the end of the 1982 season Williams wanted a raise from $200,000 to 600,000 so at least he would make more than other teams’ backup quarterbacks.  Culverhouse refused to offer him more than $400,000.  Williams left for the USFL and the Bucs would go 2-14.  They would go 12 years with double-digit losing seasons.  Poor drafting and refusal to spend money doomed them.

Sam Wyche was brought in to coach in 1992.  He didn’t help them start winning, but did a lot better in the draft, getting Warren Sapp, Derrick Brooks and John Lynch.  Culverhouse died of lung cancer in 1994. It was found the team was near bankruptcy, forcing the team to be sold by the estate.  In a last minute surprise, Malcolm Glazer out bid other suitors to buy the team for $192 million, a record at the time.   His willingness to spend money got the team winning.

In 1996 Tony Dungy was hired as Head Coach.  They would go 6-10 his first year, and 10-6 the next making the playoffs.  By 1999 they were 11-5 and lost in the Conference Championship.  Defensive Coordinator Monty Kiffen’s Tampa 2 defense was starting to make waves.  The team went 8-8 the following year, but made the playoffs the next three.

In 2001 Tony Dungy was fired for going 9-7 and was quickly hired by the Colts.  The Glazer brothers decided they wanted John Gruden as coach.  Unfortunately, he was still under contract to the Raiders.  The Buccs ended up giving the Raiders two first round picks and two second round picks for Gruden.

In Gruden’s first year, they would go to the Super Bowl and beat the Raiders 48-21.  Gruden’s knowledge of the Raiders was a big factor in the win.  The next year the Bucs would drop to 7-9 and the relationship between Gruden and GM McKay was getting rough, so McKay left.  With salary cap issues and injuries, the Bucs would struggle, going 9-7 in both 2007 and 2008.   Gruden and GM Bruce Allen were given 3 year contract extensions to start the year, and were both fired by the end of it.

The team would struggle for the next 10 years trying a variety of coaches.  Finally, in 2019 they talked Bruce Ariens out of retirement for a four-year contract.  His first year, with Jameis Winston at quarterback, they went 7-9.  Winston threw for over 5000 yards, had over thirty touchdowns but also over thirty interceptions, becoming the first in history to top 30 in both categories.

In 2020 they signed Tom Brady as quarterback.  He would lead them to an 11-5 record and make it to the Super Bowl where they would become the first team to play in the Super Bowl in their home stadium.  The @#$%s won the game.

Man, when they came into the league it was so cool. For a 9 year old kid, those unis were the greatest thing I’d ever seen. I tried really hard to root for them, but they were soooo bad, it was almost impossible. I remember being so excited when they made the NFCCG in ‘79. But they lost to the Rams, 9-0, in what I firmly believe to be the most boring game I’ve ever witnessed. 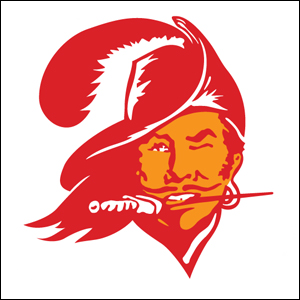 Last edited 1 day ago by MasterChief
2

For a kid who had grown up with Errol Flynn movies & stories of the Three Musketeers, it looked like a badass swashbuckler to me. Still does! 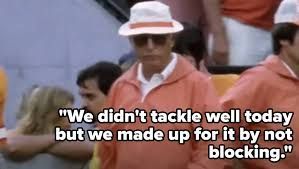 Lol, he had so many great one-liners about the Bucs & how hapless they were.

I think there’s a good chance the Bucs will win the NFC, and so, especially in light of coach Ariens’ comments during their celebration rally, I consider them a team to intensely dislike.

Last edited 1 day ago by larch
0

Thanks larch, i’ve never tried that but I’m very interested and I love lobster.

Neither have I tried it, just throwing it out there. You could ask Tony if he’d share some of those Chinese biscuits to go with your bisque.

The Olympics start this week. Enjoy them while we wait for the start of football season. #MorningHuddle

Free agent pass-rusher Alex Okafor is signing back with the #Chiefs, source said. He gets a 1-year deal and will return to KC, his home for the last two seasons.