Sneed was the NFL’s interception leader through the first two weeks of the NFL season with two interceptions. He actually suffered his injury while diving to make a play on the football that could have resulted in a third interception on the year.

“A press corner, a physical guy, a ball hawk, a guy that’s always around the football,” Madison said of Baker. “I’ve known this kid for a very long time, from Florida. We don’t really know, so we just want to get him in the building, get him used to the Kansas City way of doing things and implementing that. When you have an opportunity to get a first-round talent and implement him into your scheme and your system. Brett Veach and Coach Reid did an awesome job of having an opportunity to get him. Getting him and getting him caught up to speed on the way that we do things, that’s going to be the most important part.”

The Kansas City Chiefs look as if their backfield will be back at full strength heading into Sunday night’s game against the Las Vegas Raiders. Clyde Edwards-Helaire and Darrel Williams were back in practice on Friday after sitting out of practice earlier this week.

Edwards-Helaire and Williams both missed Thursday’s practice with an undisclosed illness, but it clearly was not related to COVID-19 given that he never had to quarantine to any degree. It was the first time Edwards-Helaire had missed any activity all season, which led to questions of what was wrong. Apparently such concerns were short-lived as both running backs are back and likely set to go on Sunday.

Motivation I touched on this a little already, but it’s worth mentioning over and over again. The Chiefs have looked bored against lesser competition this season and while that’s their right as the defending Super Bowl champions, they should have known the Raiders were going to bring their all against them in Week 5.

Instead, Kansas City slogged their way through that one and it cost them. We all know the Chiefs will still likely win the AFC West for the fifth straight season, but losing to the Raiders for a second time wouldn’t just be embarrassing, it’d bring the division race much closer than any of us would like for it to be.

It remains to be seen who will start on the offensive line for Kansas City with right tackle Mitchell Schwartz and left tackle Eric Fisher joining Martinas Rankin on the COVID-19 list this week. Schwartz also has been out with a back injury.

”I’m just going to take it day by day, but we’ll see how that goes, see how they feel and everything else,” said coach Andy Reid, who did say he’d be willing to play someone who missed an entire week of practice. ”We’ll just see how everything works out.”

The Raiders have gone to a throwback style during their three-game winning streak, rushing for 190.7 yards per game, while gaining only 138 per game passing. That’s the second highest rushing total and second lowest passing total in the league in that span. This is the fifth time in Raiders history they have run for at least 150 yards and passed for fewer than 200 in three straight wins in a season.

”If we have to do that to win, awesome. If we don’t, awesome,” Carr said. ”There have been times against the Chiefs where it’s been shootouts. I’ve done it against Alex (Smith), with Patrick, and there’s been games like that. There’s also times where the running game is there, so it just really depends. Whatever we have to do to win, that’s what I’m ready to do.”

OK in this instance the Raiders run the ball better than the Chiefs but it’s not going to matter. I can understand Las Vegas taking a victory lap after beating Kansas City earlier this year at Arrowhead but they ain’t sweeping the Chiefs. The Chiefs are better on special teams, the Chiefs are better on defense and the Chiefs are better on offense. There’s plenty of motivation for Kansas City and it already got its mulligan out of the way and is catching the Raiders on a week in which they basically had no defensive players in the building at all due to COVID-19. I’m sorry, that matters. Beating the Chiefs twice when you have no pass rush to speak of just isn’t going to happen and you also aren’t going to keep the game close that way either. The Raiders have just 11 sacks on the season they don’t have anyone you have to worry about in that regard really besides Maxx Crosby and even he is a try-hard guy. Kansas City’s offensive line is as healthy as it has been in a long time and I think this is going to be a bloodbath. My pick: Chiefs -8

Mahomes is strip-sacked and the Bucs recover the fumble.

That’s going to be a huge play and possibly a TD if the Safety gets picked up. Had to rush the throw and couldn’t step into it

Mahomes finds Kelce for nine yards on third down to move the chains.

No question. If you play single high vs the Chiefs it either has to be 1 Double on Hill or shade the MOF safety to Hill’s 1/2 of the field over top. Anything else is just a matter of time until he takes the top off of your defense. https://twitter.com/pff_mike/status/1333172363354124289 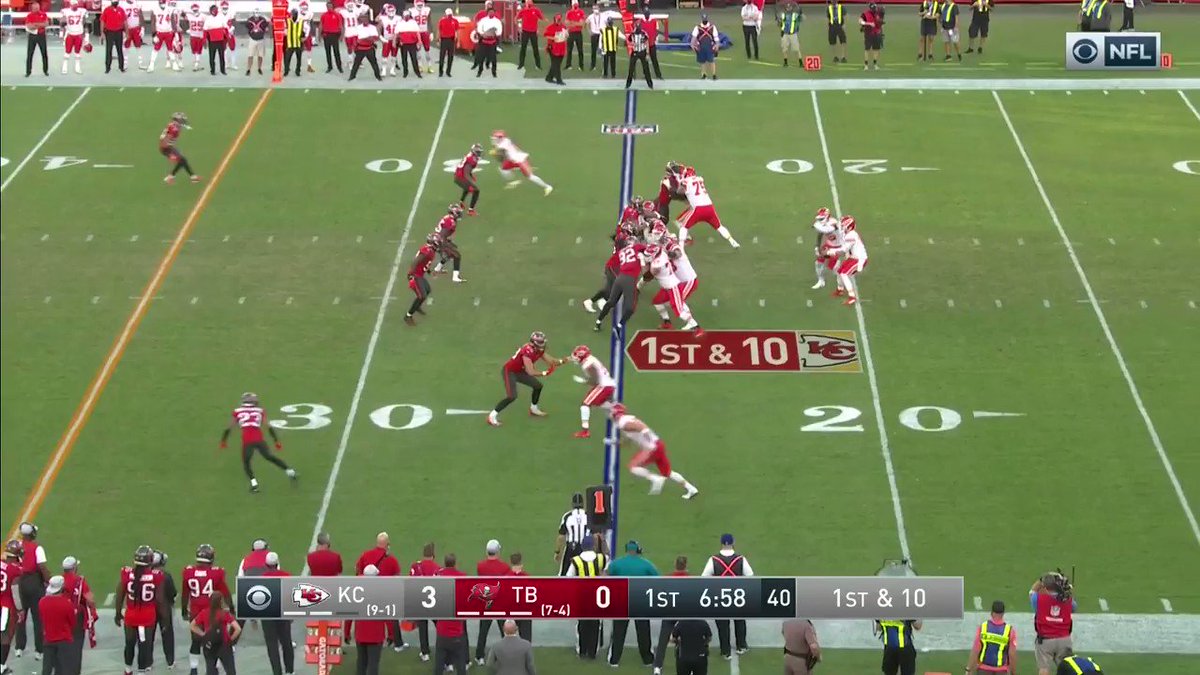 Been saying for years Tyreek Hill is the most dangerous WR in the NFL. No one in the league can guard him 1-on-1 and the Bucs are finding that out the hard way

It’s all about what happens under the bright lights, Mitchell.

@RapSheet Can attest that they looked great in practice

#Colts LT Anthony Castonzo was declared out with a knee injury, which is usually a bad sign. But source said he avoided major injury based on the initial diagnosis. Sounds like an MCL sprain for Castonzo, who has an MRI coming.

@Cheetah has 203 receiving yards in the FIRST QUARTER. #ChiefsKingdom

“The Kansas City way of doing things”. It is so cool that that’s a thing!!!

The Chiefs are slowly but surely turning into the Patriots 2.0. Looking forward to being the team everyone hates.

We haven’t been caught videotaping other teams

Andy’s not a cheater bro

I wanted to say we didn’t cheat, but the Maclin tampering was technically cheating.

Great Huddle, now lets go to Vegas and bet it all on Red!!!

… or on Black to lose

Me too. And it feels good to do it again.

… at least for awhile