Okay, now its day three of my help-wanted ad. I tried offering internet glory yesterday, but it didn’t work, although we did have one person volunteer another, which might be progress. Hmm. What to do next. Blackmail? I could use these advanced search algorithms to dig up dirt on each and every one of you. I recently tried it out but it kept coming up with my name, so I might have to do a little refining on that…

Fortunately for the Chiefs, their game against the Cowboys is Sunday at Arrowhead Stadium (4:25 p.m. ET, Fox), and things have changed dramatically in a month. The Cowboys lead the league in scoring and Prescott is the NFL’s top-rated passer, but defense is no longer dragging the Chiefs down. They’ve allowed fewer than 16 points per game over their past five, which is third best in the league during that span.

Pringle has reeled 22 of 30 targets for 301 yards and three touchdowns through 10 games this season. 19 of those 22 receptions have resulted in first downs or touchdowns, according to Pro Football Reference. Pringle’s big-play ability despite a small target share, coupled with his exceptional work on special teams has earned him the trust of the coaching staff, which in turn has awarded him a larger workload.

On Sunday, the 7-2 Dallas Cowboys will make their way to Arrowhead Stadium to face the 6-4 Kansas City Chiefs. These teams will be playing for the Preston Road Trophy: a trophy crafted by Chiefs owner Clark Hunt that goes to the winner of any Chiefs-Cowboys matchup.

Rookie linebacker Nick Bolton has played a huge part in the defensive turnaround, proving to be one of the team’s most productive and instinctual contributors through 10 games. He even managed to earn NFL Defensive Rookie of the Month honors for October. He did so while manning the middle linebacker position in the Chiefs’ 4-3 defense in recent weeks, which is arguably the most challenging spot to play on the field.

“Now had he struggled? Yeah,” Spagnuolo said. “I keep going back to the golf analogy. Golfers struggle sometimes, (even) the really good ones. But I’m happy for him and I’m hoping it can be a building block.”

“We think that GEHA Field at Arrowhead is still one of the finest stadiums in the National Football League,” Hunt continued. “And the renovation that we completed about 11 or 12 years ago really brought the stadium into— back into the top tier in the National Football League. Obviously, things change and the way fans want to consume the game and the kind of spaces that you need those things change over time and we’re paying attention to that. We’ve had beautiful stadiums open now in Los Angeles and Las Vegas. There will be things, when we get to the end of our lease here in nine or so years, I’m sure, that we’ll want to incorporate into the stadium. One possibility will be another renovation of Arrowhead.”

According to the NFL’s official personnel notice, the Chiefs have protected WR Daurice Fountain on the practice squad. This decision comes following the news that WR Marcus Kemp had been placed on the Reserve/COVID-19 list. Connecting the dots, this could signal that the coaching staff intends to elevate Fountain to the 53-man roster via standard elevation ahead of the Week 11 game against the Dallas Cowboys..

You know what to do, #ChiefsKingdom! Every RT counts as a vote for QB1 😤

RT to send our specialists to the Pro Bowl! 💪

#ProBowlVote is LIVE‼️ Every tweet, RT, or reply with one of the below will count as a vote for our guys 😎

Just a couple hours left of this deal!

Your support has been unreal, and I just wanted to say thank you

The #Steelers have placed OL Joe Haeg on the COVID reserve list.

We saw some amazing throws in Week 12! 🤩

Representing the causes most important to us for the @NFL's #MyCauseMyCleats initiative. 🙏

Any specifics of the Cowboys game you are wondering about?

Are the cowboys really that good , or is it just the level of competition they have had this year…?
I have to admit I’m a little nervous, but we are at home. And the defense is looking good..

I think we might play better on the road

No they aren’t. They’re always overrated. We’re gonna smack the girls around on Sunday. 😁

Are we ready for Red Friday?

Hell yes I’m ready, just gave my guys the day off.. sipping on a Bloody Mary, kicking back listening to the music of the morning thread… it’s gonna be a good day…

CowPies… If you’re ready for a fight,
Then you’re in the right place!

Another Chiefs’ artist! I guarantee I am not this man. We’re both poets though.

Apparently, people in the media think this game is going to be epic. And of course, almost all are saying that DAL (their darlings) will win. But. We at AG know the truth. The prognosticators among us have seen the outcome. With this in mind, here is my latest Chiefs’ song parody, set to an 80’s song by the one-hit-wonder group Thin Lizzy (who?)

Please read, rate, comment on the link, share. THANKS TO CHIEFSBLINDERSON WHO TWEETED MY LAST POEM! YOU ROCK! And as always – GO CHIEFS!

Was totally with you until you called Thin Lizzy a one-hit wonder.

Ok. Ok. My knowledge of late 70’s bands masquerading as one hit wonder 80’s bands is apparently not as good as it could be. 😀 Still, this IS the only song of theirs I recognize.

Fair enough, and for many casual listeners it’s the only song of theirs that is easily recognized. Their cover of “Whiskey in the Jar” from 1972 was incredible.

“The Boys Are Back in Town” came out on the 1976 album “Jailbreak.” Lineup changes and drug issues, particularly Phil Lynott’s addiction to cocaine, plagued Thin Lizzy after 1979’s phenomenal “Black Rose: A Rock Legend” (their best album by far, though anything between “Fighting” and “Chinatown” is good), and by 1983 they were done.

Never heard this one either.

This song doesn’t have the classic Lynott/Robertson/Gorham/Downey lineup, but Robertson was replaced by Gary Moore, one of the top guitar players out of 1970s Ireland. This came off of “Black Rose: A Rock Legend,” which as mentioned is considered their artistic pinnacle.

You should hang out on the Open Thread this evening. I feel like I’m in a Thin Lizzy mood.

You mean they have more songs that apparently were hits but most people have never heard of? 😀 And you mean you haven’t played all of their works? 😀

Not even close, friend.

Their first two albums dabble a bit in folk-rock sentiments, but then came “Vagabonds of the Western World,” which would solidify them among rock acts of the 1970s. Lineup changes soon followed, and by 1975’s “Fighting” album they became one of the top acts. And among the first (along with Wishbone Ash; see post on last night’s Open Thread) to have dual-lead guitar harmonies. Another group that does that is a little act called Iron Maiden, who often cite Thin Lizzy among their influences.

you need to hang around third shift more often .. and expand your musical horizons..

Never heard it before. This was a hit?

Never heard the Cowboy song either. Might have made a good choice for a parody, if people actually knew it.

They were also a fantastic live act, one of the best out of the 1970s. The twin-lead-guitar attack, particularly on songs like “Emerald,” was amazing. “Live and Dangerous,” their “official” live album, allegedly has parts rerecorded in the studio, overdubs added in, etc.

This album, with the same lineup (but from the previous year), does not.

Cocaine is a helluva drug

And actually I misspoke earlier (but just now caught it): heroin is what tore the band apart. That is apparently a heck of a drug as well, since Lynott’s voice sounds terrible post-Chinatown.

Last edited 11 days ago by Nasrani
1

Okay Hoosier, hahaha . You’re going to guilt me into this…, send me your video I’ll take a look and see if it’s something that I can accomplish… Brag, pompano, and Tony have my email…,
No promises…

fair enough! I am going to try and add a voiceover to the video to help explain what I’m doing but most if its is pretty straight forward. The video will give you a pretty good idea though.

Ok thanks, all I can do is try..
Let me know how to respond with any questions I may have..

I asked Tony to pass along my email with the video info. Unless Tony does some editing on it, its actually in two parts – one is how I start it, and the other is finishing it up and scheduling it. I didn’t want to waste too much time where I’m just adding additional articles.

Thanks again for considering it.

I’m going to prepare them tonight after work and then I’ll send them to you.

BTW good work on the guilt trip hoosier, you’ll get a 5% bonus this month.

Where’s that clip we had a few days ago about dividing by zero!! 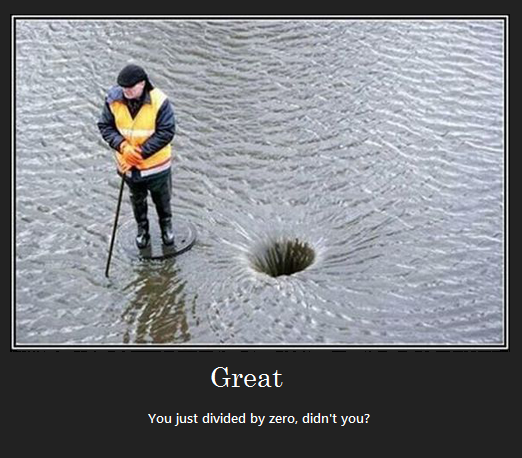 Yesterday I posted this in response to whether or not Hoosier was burnt out and our search for extra help with the huddle, but it was late… so have it MOAR.

Hoosier and I will be around, EA and Third. Tony and BRaG, KnightWolf behind the scenes and others… it’d be nice to have about 5 more fans that could write every now and again and someone else efficient in doing the Huddle for when Hoosier wants to go more than 24 hours without logging on to AG. You know.