Edwards-Helaire returned to practice Wednesday for the first time since injuring his ankle and hip in a Week 15 game against the New Orleans Saints. He was a limited practice participant. Chiefs coach Andy Reid said he was able to watch some of Edwards-Helaire’s rehab progress, noting that the 2020 first-round draft pick “gets after it.”

“A lot of it is the way you approach it and the trust you have in the trainers and so on. I’ll tell you, this kid, he just kind of went right at it,” Reid said. “I mean, he was fearless with it, and as a result, I’d tell you he’s probably a little ahead, and we’ve just got to evaluate it.”

Rookie running back Clyde Edwards-Helaire has been out since suffering a high ankle sprain against the Saints in Week 15. But he was on the field for the team’s Wednesday practice, with head coach Andy Reid saying the running back is “feeling better every day.”

First injury report for Chiefs vs. Browns, divisional round | ChiefsWire

Callaway joins the Chiefs as a former member of the Cleveland Browns, which adds an interesting wrinkle to the signing given that both teams are slated to face each other in the Divisional Round of the NFL playoffs at Arrowhead Stadium on Sunday. In another interesting footnote to the signing, former Chiefs general manager John Dorsey was the one who drafted Callaway for the Browns in the first place.

Callaway first entered the league as Cleveland’s fourth round pick from the 2018 NFL Draft as a talented wideout from the University of Florida. His on-field abilities was never questioned given his incredible speed, athleticism, and hands. He also has great skills as a returner, which means the Chiefs might enjoy some potential depth and special teams help here—that is, if things work out for him off the field.

After clearing waivers on Tuesday, the Chiefs have re-signed WR Gehrig Dieter to the practice squad according to the NFL’s official transaction report. Dieter was signed to the 53-man roster for the Week 17 game against the Los Angeles Chargers, where he had one reception for 10 yards on the day. He was released by the team this past Monday.

In order to make room for Dieter, the team released recently signed QB Jordan Ta’amu from the practice squad. It’s unclear why the team would sign and so promptly release Ta’amu. It could simply be a matter of juggling too many players at once. Perhaps they intend to sign him to a reserve/future contract, but for now, he’ll become a free agent.

How did Chiefs QB Patrick Mahomes prepare for Browns during the bye week? | ChiefsWire

“You can tell that he’s been doing his homework for the past week and a half,” Kelce said of Mahomes on Wednesday. “Just talking to him, him understanding what every single team that we could possibly face is doing defensively. Sure enough, as soon as we found out on Sunday who we were playing, he was right there and had a whole notebook ready for the Cleveland Browns. I think right now we’re in the process of figuring out the gameplan and I think like I said, what Pat does best is communicating exactly what he’s seeing and how he feels we need to attack the defense. All those conversations are extremely relevant toward the game.”

“Yeah, I mean, right when the bye week started and we knew who seeds were for the 7, 6, 5, 4 — all those seeds that we could possibly play — I took a day where I watched about four or five games of each team,” Mahomes explained. “Just trying to get a general feel of what the defense is presenting and what offenses are doing to try and attack them, from different teams and different offenses. So I had a days worth of film on the Browns, so whenever we found that out I was able to look back at that and look at my notes and try to see how it presents to us.”

Mahomes threw five of his six interceptions since their week ten bye, including three in a win against the Dolphins. Two of his three worst completion percentage games of the season came in weeks 15 (55.32 percent) and 16 (5.55 percent). While he still wracked up 13 passing touchdowns in those six games and averaged 342 passing yards, those interceptions, and poor completion percentages hurt his overall grade.

AFC divisional round has youngest group of quarterbacks ever | PFT

“I wish we spoke more often, that’s my brother for life,” Kelce said. “To see what he’s gone through and to see him grow from everything. I’m somebody who had a few red flags coming out of college. It wasn’t always a whole lot of fun for me. I had to break through some things that were tied to my name. With that, you have to challenge yourself as a man, as a human,” Kelce said. “You have to grow from it, understand how people are viewing you, and you have to move on knowing that. I think Kareem has done an unbelievable job of just going out there, playing football and keeping his head on straight. I’m happy as hell for him.”

2020 #Browns: only offensive line to finish #1 in both team pass and run block grade in PFF's history pic.twitter.com/qmhQkA3SHx

We are playing a tough football team. Hope we are not complacent

I don’t see complacency being an issue, more a matter of urgency from the get go. That sounds like quibbling. In other words: I agree.

Last edited 11 days ago by larch
3

they are a great running team with Chubb/Hunt combo

we’ll need to get them out of run mode quickly, get them down by 2 or 3 scores early force it into Mayfields hands

WE can be complacent or anything else WE want to be …

… but I hope the PLAYERS aren’t complacent

Are you onto a cure for baldness?

Really want to see the offense come alive on Sunday!

It would be nice if they send a message to the remaining teams. If ya know what I mean.

Can anyone help me understand how this is possible? Is week 14 not since week seven?

maybe he meant “he’s thrown one pick since week seven”

What they fail to mention is that included in this “outperforming” was a loss to arguably the worst team in the league, the Jets. Last I checked, “outperforming” includes far more that just throwing fewer INTs; I’d say Ws mean something too.

Baker Mayfield may have played well but did the Browns as a team?

For all the recent talk about the Chiefs not winning by more than six lately, look at the record for the Browns. Apparently, against MANY of the leagues worst teams, the Browns can’t manage to win by more than 6 unless they are playing against Colt McCoy or get 5 turnovers. And if you extend that streak of games to their last 12 games, below are the two weeks before:

Oh, and BTW, the combined records (regular season) for their opponents during this stretch was 63-95.

Last edited 11 days ago by cotton_don
4

Should have mentioned that the week 17 win against the steelers was against that dude that got hit by Myles Garret at qb. Plus mostly back ups for them. And they still only barely won.

Last edited 11 days ago by DenverDonkeyHater
1

Yup. Thanks for mentioning it.

I’m not here to defend the Browns, but trying to compare the attention the Browns record got to the attention the Chiefs record got is a false comparison. The Chiefs are held to a higher standard than the Browns as the defending WORLD CHAMPIONS (that’s for you Warpath) and also have one of the best rosters in the NFL top to bottom. The Browns just made their first playoff since 2002 and just won their first playoff game since 1995 (I think). Mayfield’s had questions about his ability to get it done on the field and he finally put it together. Let the Browns have their hype moment before the buzzsaw splits them.

of course, if the “margin of victory” is small for the Chiefs, it’s all about “yeah, but the Chiefs WON!” because winning is all that matters …

… when it’s the Browns, winning doesn’t seem to matter as much as “other metrics”

tellya what: forget the stats, the numbers, the metrics, the match-ups, the records, the numbers and EVERYTHING else … just watch the game and hope for the best

Article based on pff grades. Blerch.

I agree losing to the Jets in a game that could have clinched the playoffs for you for the first time in 85 years should knock your grade down at least 100 points.

What you really have to look at with the Browns is that they had 2 good wins all year against the colts and titans. Beyond that they played garbage, hot stinking garbage all year. Im including the late season steelers in that garbage.

Last edited 11 days ago by DenverDonkeyHater
0

hey, the Browns MADE THE PLAYS in that game vs Steelers …

some of them at least

One day closer to Sunday….. nothing better than playoff football….
Chiefs roll…. 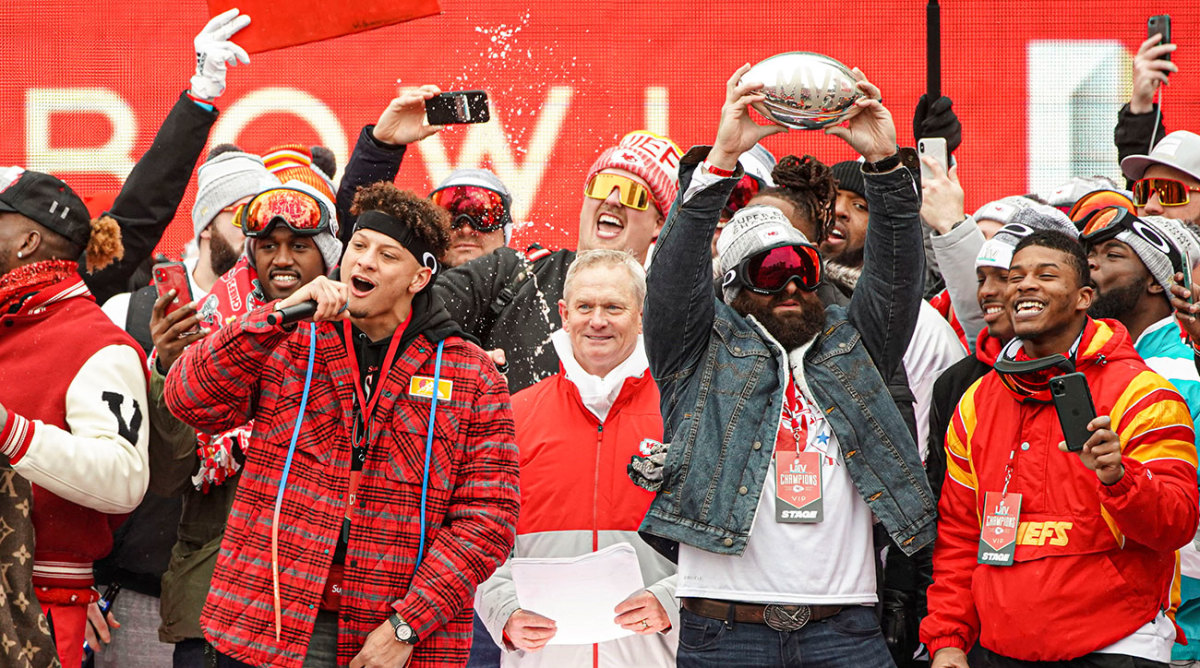