What we learned from Chiefs’ win over Patriots  | NFL.com

4) Sure there was no Newton leading the Patriots. But the Chiefs defense was still outstanding. It did what it was supposed to do, wreaking havoc on the opponent in front of it. Ten points allowed, four takeaways, two sacks and a 4-0 start. That’s what happened Monday as four defenders were responsible for takeaways and big games were had by Mike Pennel, Daniel Sorensen and on down the line. While the offense found life in the second half for K.C., the defense was consistent throughout.

The Chiefs came alive in the second half, as they usually do against the Patriots. Mahomes threw two touchdown passes and the Chiefs ran their record to 4-0 by winning 26-10. The Chiefs are the first team in NFL history to start four straight seasons 4-0 or better. They’ve had a winning streak of at least four games in every one of coach Andy Reid’s eight seasons.

Kansas City moved to 4-0, the first team in NFL history to start four consecutive seasons with four wins. The Patriots fell to 2-2. The Patriots’ mistakes finally caught up to them Monday night. They dropped two interceptions, took two unnecessary sacks that cost them at minimum six points and had four turnovers. New England needs Cam Newton to return soon.

The New England Patriots benched veteran quarterback Brian Hoyer late in the third quarter of Monday night’s 26-10 loss to the Kansas City Chiefs, turning to Jarrett Stidham in hopes of providing a spark to complement a defense that nobly held down an explosive Patrick Mahomes-led attack. It worked initially, but it was ultimately too late, sparking a question as to whether coach Bill Belichick might have helped the team by making the switch earlier.

As the Patriots tried their best to get back into the game, Stidham had the Patriots picking up a few first downs before he tried to throw deep. It turned out to be the wrong move as Fenton picked off an underthrown ball for the team’s third interception. From there, the Chiefs defense held on a final drive and watched the Patriots turn it over on downs. The Chiefs won by a final score of 26-10.

Chiefs’ Players of the Game in Week 4 vs. Patriots | ChiefsWire

Another rough night for the offense, but Tyreek Hill was a bright spot. He caught four passes for 64 yards and one touchdown. The Bill Belichick-led defense really gave Kansas City a good matchup but Hill was still able to cause problems against a solid New England secondary that looked to take him away.

The defense made multiple plays that allowed the Chiefs to win this game. They picked off three Patriots passes and one of them got taken back for a touchdown. Second-year corner Rashad Fenton had one of the best games of his young career. Fenton deflected four passes, made three tackles, one tackle for loss, and intercepted a deep ball from Jarrett Stidham late in the game. There were a few guys who could have walked away as our Defensive Player of the Game like Tyrann Mathieu, Frank Clark, Taco Charlton, Mike Pennel or even Juan Thornhill but Fenton had himself a night.

If Chiefs-Patriots is indeed played Tuesday, as is now very possible, the Chiefs would enter a major schedule crunch with 3 games in just 9 days, as they play Buffalo on Thursday night in Week 6. While we’re all fortunate to have football, COVID-19 is going to make it difficult for the league to carry on every game as previously planned (see the Titans/Steelers game) and if there truly are times when the league can move games around, they might have to consider moving that Chiefs/Bills game either to that Sunday or to later in the year so that this team isn’t at a major disadvantage moving forward.

The Kansas City Chiefs will be without one of their best young surprises for the rest of Week 4 with the news that defensive end Michael Danna was ruled out with a hamstring injury. Danna suffered the injury against the New England Patriots on Monday night.

- @ByNateTaylor & @AkronJackson on Kareem Hunt making the most of his second chance https://theathletic.com/2324029

- @rustindodd on the beautiful relationship between Mahomes and Kansas City https://theathletic.com/2302858

It’s Friday. In a pandemic. Self care is important. If you want to spend your whole morning reading some of the fantastic pieces we’ve put out today, I certainly wouldn’t blame you, and I bet your boss wouldn’t either (DM me if you need a guest pass):

“I’m older. I’m not going to be running around like a nut on the practice field, those days are done… It’s something I’m going to watch very closely.” — #Jaguars coach Urban Meyer on his health.

#Jaguars coach Urban Meyer on if the No. 1 pick played into it: “Huge. I think Shad and the organization is positioned and it’s not by accident. It’s primed to put together a good team.” Says he wouldn’t enter into a situation where he couldn’t win.

Urban Meyer Jaguars press conference will be carried live on @nflnetwork at 11:30am ET.

The #Browns have activated G Joel Bitonio from the reserve/COVID-19 list. Back in time for a playoff game.

Winless teams after a quarter of the season:
– #Jets
– #Giants
– #Falcons
– #Texans

Apparently BetOnline has declared the 4-0 Chiefs AFC West champions. They’ve taken the division off the board and are now paying out bets for the Chiefs to win the division.

Stephon Gilmore on plan vs. Chiefs: “I think we play physical with their receivers. We challenge each and every play. We play with good technique, and we get rush on the quarterback. That’s what it’s about – playing tight coverage, physical. Throwing a punch each and every play.”

They played very well against Mahomes. I can’t remember seeing Mahomes standing in the pocket looking for open receivers for that long before.

.@cheetah pulled out the backflip 🔥 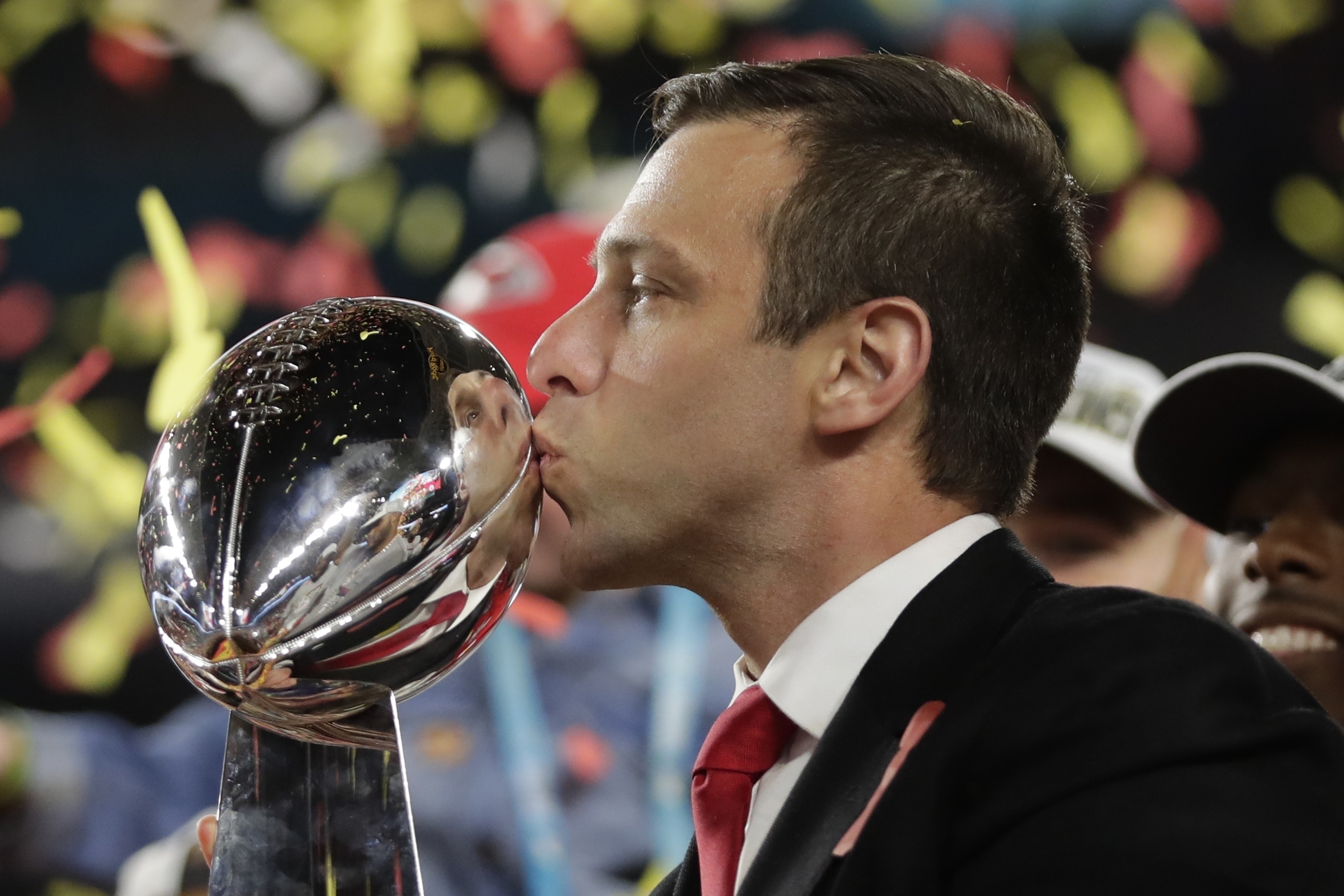 This was a fun discussion before last night’s game about whether the Chiefs would go undefeated.

Last edited 3 months ago by HawaiiFiveOh
1

Thornhill sniffed this play out 👀

That feels like a pass rush move that loses more than wins. Glad he won this one though.

Among 12 #Chiefs defenders with 30+ snaps played, DE Frank Clark was the 2nd highest-graded, only behind CB Rashad Fenton.

Frank Clark with the SACK to end the half! #ChiefsKingdom

Butker needs a break, Im not worried about his kicking costing us a game but something is up, mechanics or something is off

The line on special teams needs to block better, I think. Particularly up the middle. A lot of hands getting worryingly close to/touching the ball on its way up, and sooner or later we’re going to have an out-and-out blocked kick.

The Patriots made some distracting movement behind the line right before the kick. I’m wondering if that spooked him.

#Chiefs P Tommy Townsend was the highest-graded punter of Week 4 and it wasn’t even close!

Townsend is now the 3rd highest-graded punter in the NFL

What is that based on? Yards only?

He hit at least 2 punts right into the end zone. They were close to being great kicks but just a bit too far.

Yeah the touchbacks were definitely irritating, but he had very good stats otherwise.

Mike Tomlin was asked about new punter Dustin Colquitt and the punting game: “Not where we want to be. Not only with Dustin but with the group.”

He is probably rusty. He hasn’t punted much the past couple of years.

That sucks. I want to hear Dustin’s doing well, doesn’t matter what team he’s playing for.

We cannot have a discussion on last nights calls without talking about the BS PI call on the Honey Bagger when he got his first INT. That call gave Boston their only TD.

Last edited 3 months ago by ArrowFan
2

refs sucked equally for both teams. Yes the fumble/interception that wasnt is without a doubt an unbelievably bad call and one that will get remembered and brought up constantly because it happened to the Patriots and they and the media dont understand nobody cares about them, as you said the bogus PI that gave them their only TD was just as egregious, then the late hit on Mahomes out of bounds that wasnt called. It was a horribly reffed game

I don’t know if the PI was JUST as egregious, but f’ them anyway. I can think of a MUCH worse forward progress call…..

Last edited 3 months ago by probablyamistake
0

I wouldn’t even acknowledge the tweet. You just fell for a form of clickbait

The universe took its sweet time, but it looks like it finally tried to balance out that horrible DJ forward progress call from a few years ago.

I’m glad for the win, but those terrible calls are just destroying the game. Anyone with eyes calls that a strip-sack and return.

On the other hand, if there’s anyone who deserves some calls to go against them, it’s the Patriots. 🤷‍♂️

Long way to go on that one. Even if last nights play would have resulted in a return, I have no doubt the Chiefs would have survived and won the game. It wasn’t a game breaking call. The forward progress call was, and it happened in a playoff game.

I rewatched that play again last night. It still pisses me off

There’s a world of difference between the Mariota call and this one. Mariota fumbled as soon as he was hit. The play with Mahomes was much more reminiscent of the old “in the grasp” calls a decade or so ago. Patriot player had him around the waist so Mahomes wasn’t going to get away but hadn’t been taken to the ground. Back in the day that was how a lot of QBs got hurt because a 2nd player would come in and nail him, that’s why they instituted the in the grasp rule. The ref blew his whistle last night when Mahomes was immobilized, even though he could still move his arms. The replay showed the ref blowing the whistle and I think he was signaling the play was dead as the ball was coming out.