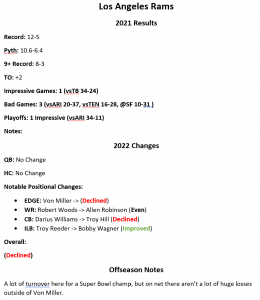 They actually had quite a bit of turnover, especially compared to the last two champions, who made almost no changes to their starting rosters. They didn’t suffer catastrophic losses or anything, but on net they did lose talent. And without quality picks in the foreseeable future, they’ll likely continue to slowly decline unless they can hit on late round picks. 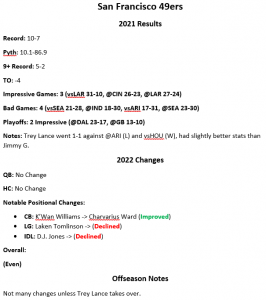 There’s a very real chance the 49ers win the division, especially if Trey Lance plays and plays well. He had nice stats when he played a bit last year, but I’ve heard rumors that behind the scenes he’s disappointing the coaching staff, so for now I’ll assume it’ll still be Jimmy G behind the wheel. 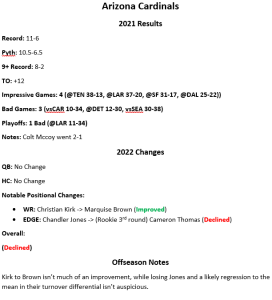 I saw an interesting stat about Kliff Kingsbury Apparently his teams consistently start strong then fade down the stretch, going all the way back to his days at Texas Tech. That’s not great for the Chiefs (who play them week 1), but is an important thing to keep in mind when evaluating them during the season. 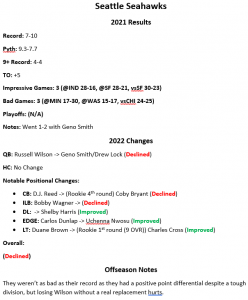 I’m not as low on the Seahawks as everybody else. It’s easy to say they had a losing record and loss of Russell Wilson, but they had a positive point differential and weren’t that much worse when he was out. I wouldn’t be shocked if they had a better record than the Broncos.

I’d feel more confident if they brought in a real QB, somebody like Minshew or Bridgewater could have been gotten easily, but I totally understand that they need to just tank.

no disagreement with the order here (Rams, Niners, Cards, Seahawks) but I do disagree that the Seahawks “need to tank” this season … the Rams w/o picks is still funny to me, will be interesting to see how it plays out in the NFC overall (Rams? Niners? Bucs? Who Knows Who???)

one thing that’s pretty clear (I think) is that the AFC is much stronger (at least at the top) with the Chiefs, Bills, Bengals (and MAYBE Chargers), each of which has a top-rated QB at the helm