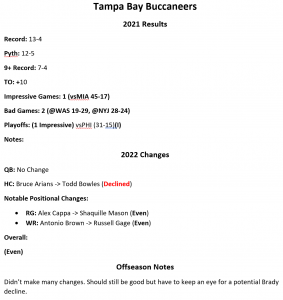 Tampa Bay isn’t all that great, but they’re still heads and shoulders above the rest of their division, so they’re the easy choice to win it again. That’s the power of having Tom Brady on your team. 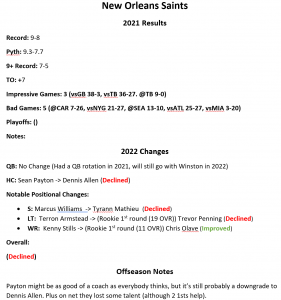 The Saints managed to still have a winning record last year despite losing a bunch of talent. But because of the cap shenanigans they did to make the team a contender with Brees they’re continuing to shed quality players (and now even their coach). They probably won’t be terrible, but they also are unlikely to make the playoffs. 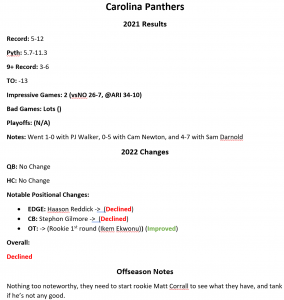 I tried to tell everybody that Sam Darnold sucks, but did the Panthers listen? As of this writing he’s still their starting quarterback, but there are a lot of rumors about them bringing in Baker Mayfield, who should be a major upgrade when healthy 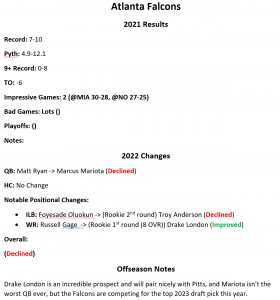 After the Matt Ryan trade, I was expecting to have the Falcons as the worst team in the NFL, but after looking at them a little closer, I don’t know if that will be the case. On the one hand, their Pythagorean record is way worse than their actual record, and they did lose Ryan on top of that, but Mariota isn’t the worst quarterback in the world. Plus, if Drake London lives up to his potential as the top wide receiver in an incredibly deep wide receiver class, they will have a great duo in London and Pitts.

Calling Williams to Mathieu a decline doesn’t seem right. Williams has never even been a pro-bowler while Mathieu was a first team all-Pro in 2019 and 2020, and a pro-bowler in 2021. Mathieu may be on the decline, but it’s hard to see that he would be a step down from Williams unless he falls off a cliff this season.

I try to judge based on contracts. My assumption being that NFL team generally are going to be more accurate in their player assessment than I am given how much more resources they put into it than I do. Since the contracts say Williams > Mathieu, that’s what I put on the sheet.

will be semi-interesting to see if Gronk returns to the Bucs … not much to argue with here, good stuff, Tony (appreciate this series of articles)