And no, not in a “he really inspired them” kind of way.

As you’re probably aware, Tony Gonzalez is commonly considered the greatest tight end in NFL history, and is still the Chiefs all-time leading receiver. But after 2008 the Chiefs were bad and didn’t look to be going anywhere fast, so he requested a trade.

The Chiefs traded Gonzalez to the Falcons for a 2nd round pick in the 2009 draft. With that pick the Chiefs selected Javier Arenas. Arenas spent 3 years with the Chiefs and while at one point he was considered one of the top slot corners in the league, Andy Reid apparently didn’t agree and shipped Arenas to the Arizona Cardinals in his first offseason in Kansas City in 2013.

In return for Arenas the Chiefs got fullback Anthony Sherman, who is still with the team to this day, including 7 offensive and 18 special teams snaps in Super Bowl LIV.

So when you put it altogether, the Gonzalez trade managed to help the Chiefs win a Super Bowl.

Wait. Are you telling me we won the Super Bowl this year?!?

Wow. I thought without Marcus Peters that wasn’t going to be possible. Hmmm…go figure.

I remember watching Bob Saggot on Full House, and that may have led to my sense of Dad Humor.

Is that the Indian dude on Street Fighter?

How do you get Dhalsam from Bob Sagot?

Because they are both Irish.

I am having a hard time finding a really bad trade in the Reid/Dorsey/Veach era that doesn’t include draft day trades.

How about when we traded Marcus Peters in exchange for one more year of Bob Sutton?

That was a case of the team finally having enough of his crap and getting what they could for him since it was clear he wasn’t going to re-sign here. He picked a fight with the one coach on the team he shouldn’t have. Yes, I am aware Kelce got into a spat with said coach during a game but that was Kelce’s first outburst in 3 years. Kelce also matured greatly over the years even if his one major emotional outburst on the field was one that I couldn’t blame him for.

Or to put it another way, we chose to keep Bob Sutton for a year instead of Marcus Peters.

Just sayin’, you can try to bury that particular piece of suckage under however many words and justifications you want, but that is the core truth of it. I mean, it’s ok in the end, we did end up winning a Superbowl. But we also did make a few mistakes along the way. And it’s ok to recognize that. After all, the Chiefs aren’t Jesus.

Bob Sutton wasn’t the coach Peters picked a fight with though.

Yes he was. On the sideline. Every Marcus Peters hater and every Chiefs-scuser talked incessantly about how Peters “went after Sutton” during a game and Houston had to “hold him back.”

Sutton’s bad in-game decisions and overall bad coaching are the core reason that Peters got fed up enough to go off on everybody. That’s something we all know now. At this point, with all that completely behind us, to continue to go to the effort of trying to string words together in such a way that might allow you to pretend otherwise to yourself…..well, man, that’s just not productive.

It happened. The Chiefs got past it and won a Superbowl anyway. fin.

Im still pissed that Bob Poopy Pants Sutton refused to move his corners around. So fucking stupid in Today’s NFL

He should’ve been gone a year before he was anyway, totally regardless of Peters. I’m not going to say that Reid should change, because his loyalty is part of what makes him great by making great people want to work for him. But, that was just one time when Reid’s loyalty steered him wrong.

Hell, now that I think about it, Peters’ calling out Sutton like he did might’ve been a major factor in Sutton sticking around for that extra year, by triggering Reid into wanting to protect Sutton.

ANYhow though, it was still a major wrong decision. Sutton is a likeable old dude and Peters is an un-likeable punk. But, Sutton was wrong, and Peters was right. When you’re responsible for a lot of other people’s careers like Reid is, then sometimes you gotta see through the fluff.

Not going to get into the whole Sutton-Peters thing, I just want to point out that the situation had other complications, not least of which was Veach’s first draft happened in the ’18 offseason. Blowing up the D and installing an entirely new defensive staff would have compounded what was already a demanding situation, since through no fault of his own (as such things are judged) he lacked a Rd. 1 pick.

Then there’s the question of who would replace him and how much Reid and Veach wanted Spags if they were going to fire Sutton, since he wasn’t available just then. Lots of moving parts involved in the decision-making that offseason, IMO.

Man, we still remember how the 2018 offseason went. Veach did not draft for Sutton. It’s likely that a 4-3 DC would have been an improvement, despite (or likely because of) being new to the team.

Spags was available. He had no job in 2018. I guess you’re gonna speculate that he preferred having no job to having a job with a Superbowl contender like the Chiefs working for a guy like Andy Reid, but, well, cue the John Turturro That Don’t Make No Sense gif.

I mean…. just, c’mon guys. In the near decade I’ve been commenting on AP and AG, there has always been this thing between “haters” and “homers.” In truth, it’s mostly been between fans who can handle talking about mistakes that the Chiefs sometimes make, and fans who can’t. And if you think I’m unfairly exaggerating the homers’ position here, just check up a few comments where this sub-thread started by Ranger literally saying that he couldn’t find ANY bad trades the current Chiefs had made.

Peters is gone. Sutton is gone. The Chiefs have a Superbowl. We all now, with full benefit of hindsight and the perspective that should bring, know full well why every one of those things happened. So can we just, for the love of Chiefus, frigging STOP with the imagined-up excuses? Mistakes happened, we fucking won anyway, the End.

Aaaand now in the next thread over….. sigh

In truth, it’s mostly been between fans who can handle talking about mistakes that the Chiefs sometimes make, and fans who can’t.

So much for the End.

We gotta have stuff to argue about now that we are sitting on top of football’s highest summit! (not trump)

I wonder what Marcus Peters thinks about us winning the SB, and how he could have also if he just stayed.

I don’t think Peters has shadowed WRs anywhere he’s been. I might be wrong

Um no. We got rid of each. One a year too late. At least we didn’t promote Freddie Kitchens to fill their void.

Oof. What a stretch.

It’s the off-season isn’t it?

I think people forget one of the main reasons why Arenas was shown the door. Not only was he not a scheme fit but he picked a twitter fight with The Blogfather.

I need to check who you are referring too

He picked a fight with Joel Thorman.

I think Joel Thorman might be the only guy left on the internet who I have not picked a fight with.

Not really a fight but I was severely disappointed how he handled the situation between Pete and us. Years of helping AP what it was and he takes the side of an egomaniac.

I think he saw AP as….a mature thing, well before that. He helped AP grow up a LOT, for a long time. Think he figured he was fully successful as far as building AP, and it was time to let it stand and go try something else.

I think ol’ Sweet Peeny’s thing is less that he’s an egomaniac and more that he’s a corporate critter, something I was saying when I was screaming my fool head off about where he was taking AP. Corporate drones tend to rely on policy and that gives them a lot of undeserved confidence in their actions.

Anyone remember how I was talking after he rolled out the free shirts and having meet & greets featuring the writers, so their fans could talk to them? Pure corporate stuff going on there.

You mean the meet and greet during the Rams game? Sorry I was at Brewbakers with the rest of the AG crew.

Plus, TG was on the sidelines at the SB, so he must have had some secret insider info having played in the NFC.
Makes up for Suggs giving the Ravens our playbook

TG was legit excited when the Chiefs won the Super Bowl. He was on the Chiefs sideline the entire game I believe and even clowned around with Kelce after the final kneeldown.

Kelce came and celebrated with TG after his touchdown. Go check out the Mic’d Up video and you can see it.

I can take the butterfly effect even further and argue that Genghis Khan was all integral part of the chiefs super bowl win.

How Ug inventing fire in 50,000 BC helped the Chiefs win the Super Bowl.

If Adam and Eve didn’t eat the Forbidden Fruit there wouldn’t even be a Super Bowl. So we can thank Satan for our championship.

Will Brady return to the Patriots? Will it matter? 5 replies

Could A Higher Cap Lead To A Chiefs Super Team? 13 replies 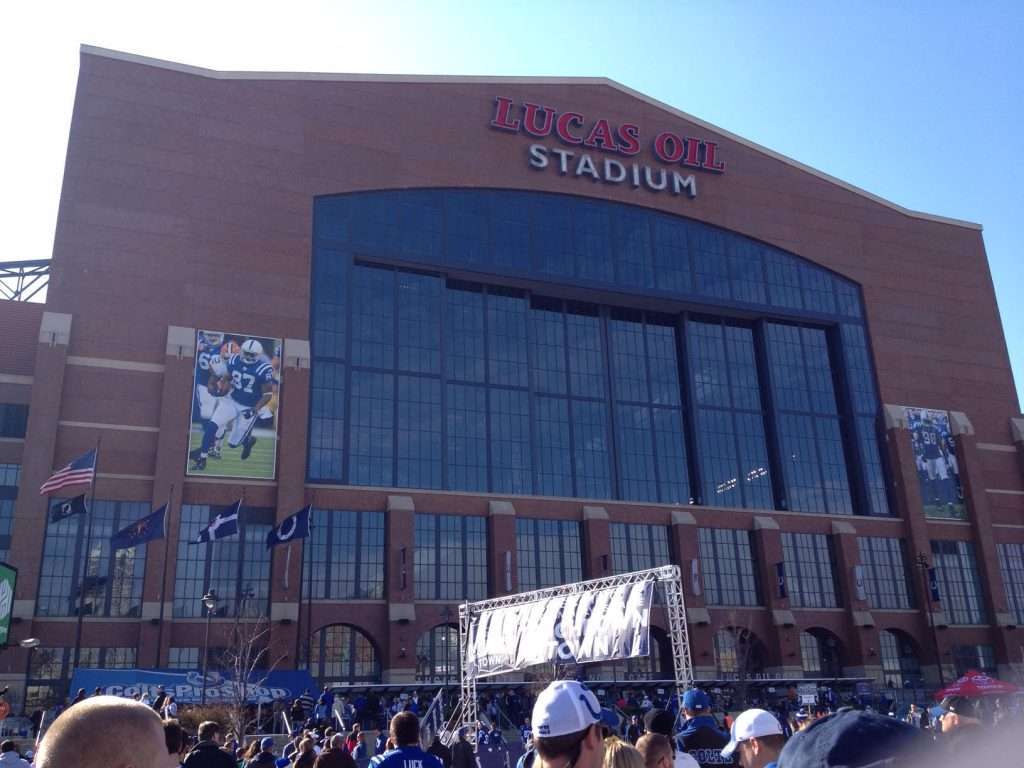 Friday Night at the Movies. @01lowbird and @D_Harms19 discuss the best jokers.

Friday Night at the Movies

Adam and Dan discuss who played the best Joker.

Happy Friday! Here is your #MorningHuddle

Morning Huddle: It is Friday!

Big news yesterday about Chris Jones going to get the franchise tag. Surprisingly that was not the only Chiefs related news to hit, as I found a coupl...

This is a nice shirt @ArrowheadGuys! 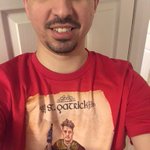