Another week, another win! The Kansas City Chiefs handled the Raiders with ease, and showed that all four quarters of Oakland’s best still doesn’t compare to one quarter of ours …

So as we ramp up for the season Home Opener, let’s check out what the rest of the League is up to!

On Tuesday, Pat Shurmur announced that despite how efficiently Eli Manning was leading the Giants toward another losing record, it was the rookie’s turn to disappoint fans around New York. In his two regular season starts thus far in 2019, Manning has thrown for 556 yards, two touchdowns against two interceptions, and an impressive QBR of 37.3 …

In light of such a mind-blowing performance, the brain-trust in New York has decided to insert the Mini-Manning under center and see if his additional mobility and slightly better hairline can help the team improve offensively.

While it’s always an immense pleasure to poke fun at old Eli, it should be stated that the team has little to nothing in the way of receivers, a porous offensive line, and a fan base that will turn on a player faster than the Chiefs score second quarter touchdowns.

Patriots Preparing For Third Bye Week In A Row

How good is it to be New England this year? The perennial Narcissists of the Northeast once again have one of the easiest starts to a season imaginable. After hosting the broken Steelers (and apparently breaking them further) and embarrassing the Brown-and-Bell-less Pittsburgh team, they had the fortune to move on to a Miami team that is actively doing everything in its’ power to NOT play football.

This week they get the matchup of a lifetime — a Jets team that was barely “meh” when healthy, New York is now not only missing Sam Darnold due to Mono, but are starting Luke Falk at quarterback after Broncos wunderkind Trevor Siemian went down with an injury last week.

As of this writing, the Patriots are 22-point favorites over the Jets. It’s easy to be a juggernaut when it’s week three and you still haven’t played a football team yet …

The Best Offense In The League Belongs To The Chiefs Ravens?!

That’s right, you read that correctly. No, the opinion above is not my own. It is the opinion of one Adam Rank, writer for NFL.com, who compares the teams using female romantic comedy characters.

Now I will admit, through these first two games — admittedly against the level of competition Gulliver faced in his travels — Lamar Jackson has made me eat every one of my “running back” jokes made during the offseason. He has looked accurate, and more importantly, hasn’t even begun to display as much of his mobility as he had shown last year. Also, the addition of Brown to the receiving corps appears to be a huge boon to the passing game.

But you’ll have to excuse me if beating the Cardinals and Dolphins defenses doesn’t exactly make me a believer just yet. While the Baltimore offense has looked impressive, they have been beating up on some bad teams (as have the Chiefs). This here is a joke-free paragraph that I will end with: I guess we shall see who has the better offense at roughly 3:30 p.m. Sunday.

Titans quarterback Marcus Mariota claims that while he is banged-up, he will be good to go for Thursday night’s game against the Jacksonville Jaguars. Honestly, with as often as that guy gets injured, they should create a “Healthy List” for his name to appear on to save ink.

Patrick Mahomes wins — yet again — the AFC Offensive Player of the Week award after his stunning second-quarter assault against the Raiders last Sunday. I think it would be nice for us to give the Oakland defense an “assist” credit for that game. Like a participation trophy. Good job guys.

Jaguars phenom and modern-day sex icon Gardner Minshew was recently approached about an endorsement for an adult webcam site (or something). The site apparently wants the quarterback to continue doing bands and stretching exercises in a jock strap or in the nude, and lead scores of other naked participants with their workouts at home. This is real life, folks.

What else have you heard of interest?

AB…if the Pats cut you, welcome to Kaeprnickland. That dude is doneso until this all is cleared up legally. Lost his ass in $$ too. Almost feel bad for the guy…almost.

Have to admit being relieved with the AB release. I did not have much hope that we were beating the Pats with him. Without him, we have as good a chance as we did last year, so it’s possible.

I’m ready to admit it. Ha, I mean, many of us, including me, admitted this when the AB signing was announced: the Patriots made a mistake.

Everyone makes them. Not everyone admits making them. Some are smart enough not to make them to start with. When winning at all costs is your basic MO, then mistakes will invariably be made.

To change the subject…

Whatever happened to that NFL Code of Conduct Violation by the Pats owner? Did they change the Code of Conduct to include allowing publicly revealed visitations with prostitutes, or did they decide that he didn’t have anything on his person that would give him reason to visit one?

Curious thing in this age of NFL conduct sagas. That one went silent while none of the others did. And even if the NFL was temporarily silent on any of them, the media sure wasn’t too silent on Hill…much quieter on AB…near total blackout silence on Kraft; haven’t for quite some time.

How much of the Pats cutting ties with Brown was due to his pending investigation (and thus, saving face on their part) versus his locker room shenanigans?

Reportedly, Patriots owner Robert Kraft was infuriated with Antonio Brown. In a Friday morning meeting with Bill Belichek shortly before Brown was released, Kraft went into an unbridled tirade which boiled over into this rant, “Who does Antonio think he is threatening this woman by social media?!? I believe he really did rape these women! It would have been fine if they were prostitutes, and he used his lawyers to smooth everything over legally, but this is over the top! He is done here, do you hear me?! I want him off the team, and I mean today!”

It's unfortunate things didn't work out with the Patriots. But Antonio is healthy and is looking forward to his next opportunity in the NFL. He wants to play the game he loves and he hopes to play for another team soon.

I doubt anyone is signing him. Dez was half the headache and still couldn’t find a job.

Dez has 1/3rd the talent, too, and that’s prolly generous.

Hopefully the Pats are on the hook for most/all of that gtd money. Also hopefully this convinces Veach not to send 1st+ picks to the Jagoffs.

Apparently he wasn’t due the first $5M of his signing bonus until Monday, so there’s a pretty good chance the only thing he gets was the game check.

What I do know about Antonio Brown.

Pats are now off the hook for 14 46-man active roster bonuses. He will definitely get paid for 2 weeks. His 2019 salary is fully guaranteed but it can be voided because of behavior. Pats have not paid Brown any of his signing bonus.

Patriots’ statement: “The New England Patriots are releasing Antonio Brown. We appreciate the hard work of many people over the past 11 days, but we feel that it is best to move in a different direction at this time.”

Something ALWAYS happens to wreck my predictions…

We still getting Ramsey?

No.. the jags owner loves him supposedly and is willing to let him fill the Brinks truck..

We’re going to battle with whom we have now IMHO

He should have never been signed. I hope they are on the hook for all 9 mil too. I still want us to sign Ramsey. 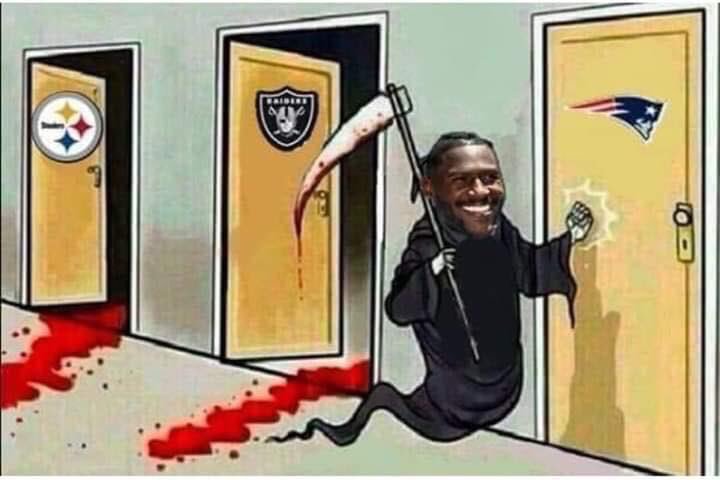 Patriots have released Antonio Brown according to reports I’ve seen by ESPN and CBS.

I hate to admit it, but there is something about Minshew. He might could get it.

Q39 last night, ribs were awesome as was the pork belly and wings. Brisket and pulled pork were meh.

Meh=amazing in my part of the country (Denver). I’d kill a man for a some Q39 brisket. I don’t know why no one can open a good BBQ joint out here.

Too many broncos fans. I guess they figure you’ll barbecue a horse or something… which of course we’re going to do when we visit Whatever It’s Called at Mile High every year for the foreseeable future…

Q39 brisket is my favorite. Joe’s for ribs, Q39 for brisket.

Will Brady return to the Patriots? Will it matter? 6 replies

Could A Higher Cap Lead To A Chiefs Super Team? 13 replies